What A Super Bowl In Los Angeles Means For NFL Relocation 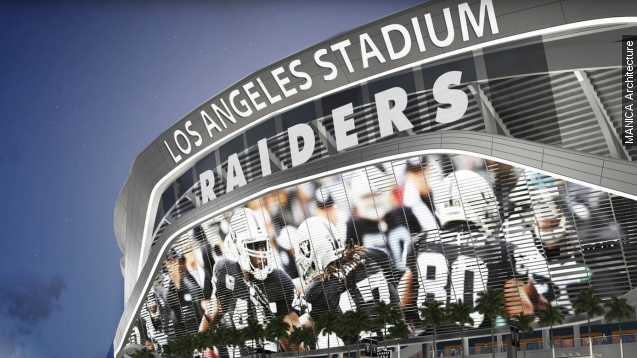 The NFL owners' meeting wrapped up Wednesday, and there was plenty for the NFL execs to talk about.

That includes a city without an NFL team that could be hosting the Super Bowl as soon as 2020.

While Los Angeles doesn't have an NFL team at the moment, it's becoming increasingly likely that league dream will come true in the next five years.

The Oakland Raiders, San Diego Chargers and St. Louis Rams all are widely viewed as in the mix for a possible relocation to L.A.

For a 2020 Super Bowl to happen, the Los Angeles Times reports at least one team would need to make a move to the city by 2018.

"The proposed Carson stadium would seat at least 70,000 people and located adjacent to the 405 freeway."

At the moment, it seems like the Raiders and Chargers joint proposal in the city of Carson may have the most momentum.

The two teams just completed a deal with the city of Carson, located about 20 minutes south of downtown L.A., to purchase 157 acres of land for the site of a new $1.7 billion stadium.

While the Rams, on the other hand, seem to be making some progress with possible plans for a new stadium in St. Louis.

"Even though [Rams owner] Stan Kroenke is moving ahead with his stadium project out in Inglewood, the NFL is pleased with the advances made by St. Louis on the riverfront project."

"There's tremendous progress going on there."

There's still a chance the Rams could move to Inglewood, though, as team owner Stan Kroenke's been working with officials there on a $1.8 billion stadium.

It's worth noting critics have pointed out professional sports teams have used the carrot of moving to L.A. to pressure their hometowns into building new stadiums before. The new Minnesota Vikings stadium heavily funded by taxpayers is the latest example. (Video via KMSP)

But if the NFL is strongly considering L.A. as a possible Super Bowl location five years out, it speaks volumes about the chances of a team moving there. A team or teams could be set to move as early as 2016.

This video includes images from Getty Images and melfoody / CC BY NC ND 2.0 and music from Breakzlinkz / CC BY 3.0.