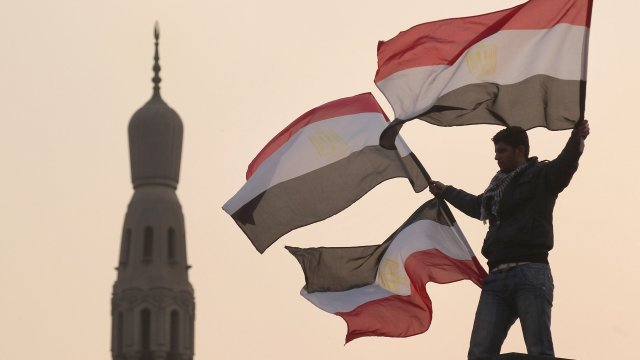 SMS
What A Flag Can Tell You About Its Country
By Jake Godin
By Jake Godin
August 1, 2017
Flags are more than just pieces of colorful cloth on a pole — they're supposed to represent a nation and what it stands for. Here's how.
SHOW TRANSCRIPT

Everyone has a flag, from McDonald's to Antarctica. Some carry more weight than others. But flags aren't just decoration, especially for nation-states. There's actually a lot of hidden meaning built in. We'll explain.

"Your flag, written through it, is your history and your ideals about freedom and independence. A country doesn't always live up to its ideals, but the fact is that the ideals are embodied in the piece of cloth people look at," he says.

Look in any part of the world, and you'll see the flags for some nations resemble their neighbors'. Red, gold, black and green dominate African flags. Middle Eastern nations tend to feature red, white, black and green. Flags for Slavic nations take on red, blue and white.

The reason for this varies by region, but it can be boiled down to a shared identity. Many African flags pay homage to the flag of Ethiopia — the only African nation to resist colonization. The red, white, black and green on Arab flags can be traced back to the Flag of the Arab Revolt, which symbolized historic Islamic empires.

And it's not just colors. The flags of Scandinavia share the same design: the Nordic Cross. Shared flag themes don't necessarily mean the nations will get along — but they do suggest nations share a common history.

And, as much as flags can serve as symbols of unification, they can also be points of division.

In his book, Marshall uses the flag of Mozambique as an example. The flag is the only nation-state flag with a modern assault rifle on it. It's also based off the flag of the major group that won the country's civil war.

"So if you've got five ethnic groups in that country and they're looking at their national flag, which is supposed to unify them, some of them are looking at pretty much the flag of the one that defeated them. And that's not a good template for unity," Marshall says.

In some cases, they can even cause soccer riots ...

Granted, not all countries are that into their flag, often for deeply historical reasons. Take Germany, for example.

"Germany is a good example of a country that is ambivalent at best. And it's because of its history. Now, the German flag of Deutschland is not the Nazi flag, but they are so intensely aware of their history … that they are very reluctant in Germany about public displays of nationalism," Marshall says.

But in many countries, the flag is held in almost holy regard — like in the United States. And that's why flag burning is so controversial. When someone torches a flag, they're not just lighting a piece of cloth on fire, they're burning an idea that cloth represents.