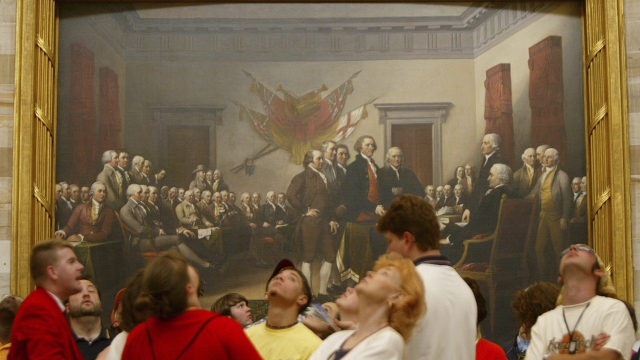 In the United States, the year 1776 has been a rallying cry since the earliest days of the country.

It was the year America declared its independence from Great Britain, and has represented freedom, heroism and American unity.

But recently the year of the nation's founding has taken on a darker, more divisive meaning.

Republican congresswoman Marjorie Taylor Greene and other GOP lawmakers compared the Electoral College vote to the year of the nation's founding, and it could be seen on flags and clothing during the attack on the Capitol.

"The principles of '76 you're announcing are principles at odds with the very course of action you're taking," author Joseph Ellis said. "Attempts to appropriate the founding or pieces of it. They work in a sense that they can provide a sheen of respectability, but in this particular instance, it's a corruption of the past. It's a false narrative."

Joseph Ellis is the author of "The Cause: The American Revolution and Its Discontents." One of the major themes of the book — whether it be trade, taxes or overarching government — is that the colonists who supported independence had different reasons for doing so.

"They didn't call it the American revolution because most people didn't think of themselves as Americans," Ellis said. "They were New Englanders or Virginians or Carolinians, and also they didn't think it was a revolution. They thought it was a war for independence that had radical and indeed revolutionary implications. The term became a canopy under which different groups from different regions with different agendas can come together."

But misconceptions about America's founding haven't been exclusive to one political ideology, like the flawed argument that colonists rebelled to protect slavery.

Instead, Ellis says, the nation's beginnings and its history since then don't neatly fit any one narrative.

"One way to put it is the same nation that doesn't end slavery also leads the West to rescue Western civilization from Hitler, Stalin, and Mussolini and Japan in the 20th century. That's the story. It's complicated, but it all starts with a big bang and '76."