What A $15 Minimum Wage Would Mean For Different States 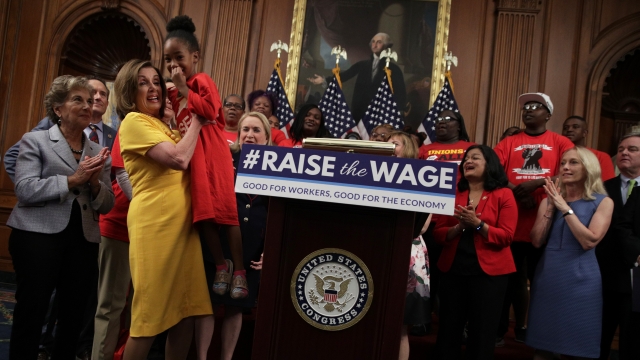 SMS
What A $15 Minimum Wage Would Mean For Different States
By Johannah Grenaway
By Johannah Grenaway
July 18, 2019
The House just passed a bill that would boost the federal minimum wage to $15. But that doesn't mean the same thing for all minimum-wage workers.
SHOW TRANSCRIPT

On Thursday, the House approved a bill that would raise the minimum wage to $15 across the U.S. But since the cost of living varies state to state, Newsy looked at the costs of living in different states to see how far $15 an hour would go.

Different agencies and groups calculate cost of living using different factors, but it mostly boils down to the total cost of all the basics you need to live at a certain standard: housing, utilities, taxes, groceries and so on.

Well, we looked at various data sheets, and some of the most expensive states to live in are California, Hawaii and New York. Washington, D.C., is up there as well. The least expensive states include Mississippi, Alabama and Arkansas. But, living expenses can vary throughout states as well.

Pew Research Center gets into the specifics. It calculated the cost of living in certain cities. The numbers are based on 2016 data developed by the federal Bureau of Economic Analysis and "regional price parities." RPPs measure the cost of goods and services in different areas of the country relative to the overall national price level. Basically, they can tell you the purchasing power of a dollar in different areas.

In San Francisco, California, one of the most expensive places to live, the actual purchasing power of $15 is really only about $12. Whereas in Beckley, West Virginia, $15 would stretch to the equivalent of $19. Austin to Round Rock, Texas, and Vineland to Bridgeton, New Jersey, have the only RPP calculations where $15 has the exact value of $15.

With all of that in mind, you might be wondering: Would some states actually be better off setting their own minimum wage?

Well, giving all minimum-wage workers the same *spending power would mean hundreds of different minimum wages at the local level. $15 in Pittsburgh has the same spending power as $19.41 in New York City, but $13.46 would get you just as far in Fort Smith, Arkansas. So, to put it briefly, states with higher costs of living might be better off setting their own minimum wages based on cost of living.

Each state does have the authority to do that, though the higher minimum wage, whether it's state or federal, takes precedence. According to the Congressional Budget Office, 21 states have already raised their minimum wages above the federally required $7.25 an hour.

The CBO says raising the federal minimum wage to $15 could cost the U.S. 1.3 million jobs, but could also raise incomes for as many as 27 million workers by 2025.