Whale In Harness May Have Been Trained By Russian Military 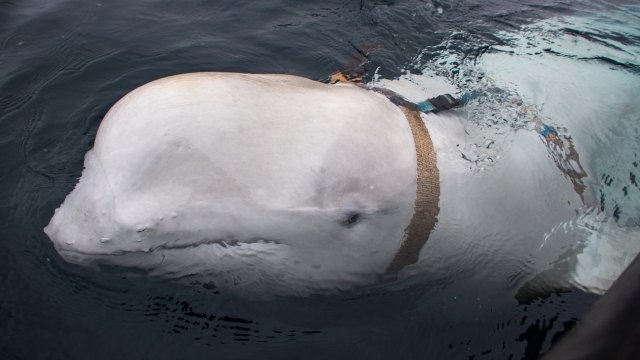 SMS
Whale In Harness May Have Been Trained By Russian Military
By Katherine Biek
By Katherine Biek
April 29, 2019
The whale was reportedly spotted off the coast of Norway last week wearing a harness that said "Equipment of St. Petersburg."
SHOW TRANSCRIPT

Experts believe a beluga whale recently discovered off the coast of Norway was most likely trained by Russia's military.

The whale was reportedly spotted by fishermen last week. It was wearing a harness around its body that said "Equipment of St. Petersburg."

Those fishermen contacted Norway's Directorate of Fisheries, which came out and removed the whale's harness. A marine biologist with the directorate told CNN that the harness had "mounts for GoPro cameras on each side of it."

As of Monday morning, Russia's military hadn't responded to reports about the whale. But during the Cold War, the Soviet Union did train dolphins to search for underwater mines, locate divers, and, according to some reports, even help take out enemies by planting explosive devices on their ships.

In 2017, a TV station owned by Russia's defense ministry reported that military officials were once again training dolphins, seals and whales for military roles in the Arctic Ocean.

The use of marine mammals isn't a tactic exclusive to the Russian military. In fact, the U.S. Navy's Marine Mammal Program has been around since the 1960s. Although its bottlenose dolphins and California sea lions similarly help detect underwater weapons and apprehend unauthorized divers, the Navy says it's never trained its dolphins to act as "offensive weapons."