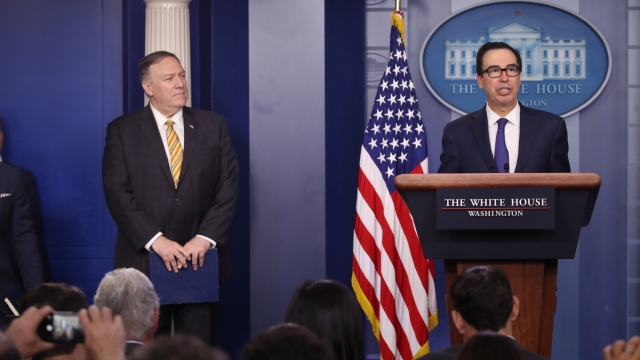 In a press conference, Mnuchin said the president's order "greatly enhances our ability to identify sanctions and deter perpetrators of terrorism worldwide."

Mnuchin also said the Trump administration sanctioned more than two dozen individuals and entities from 11 terrorist groups, including ISIS and Hamas, on Tuesday.

They made the announcement a day before the 18th anniversary of the Sept. 11 terrorist attacks — and about an hour after President Donald Trump tweeted national security adviser John Bolton had resigned.

The president canceled U.S.-Taliban peace talks over the weekend after the group claimed an attack that killed 10 civilians and one U.S. service member in Kabul. But some outlets have reported the White House is divided over whether the negotiations are even necessary to end the Afghanistan war. Bolton had consistently opposed making a deal with the Taliban, arguing the U.S. could withdraw troops from Afghanistan without one.