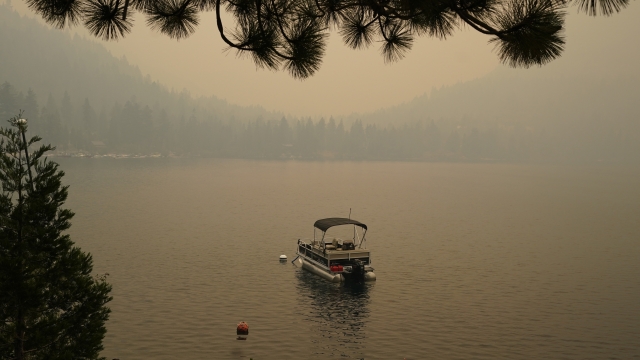 A raging wildfire in northern Minnesota threatened houses and cabins in the popular tourist area of the Boundary Waters Canoe Area Wilderness. Lightning-ignited fires have burned more than 30 square miles.

Patrick Prochaska watched one of the wildfires burn toward his cabin in the Wilderness — the fire scorching the trees surrounding his home. Prochaska says he doesn't know if the cabin survived and will not until he's allowed back in the evacuation zone.

The National Interagency Fire Center (NIFC) reports there are 92 large fires burning across the U.S. The fires have scorched millions of acres of land in the west including large amounts of land in Montana, Idaho, Washington state, Oregon and California.

The location of the wildfires coincides with the areas of the country experiencing either extreme or exceptional drought conditions as reported by the Drought Monitor map.

NIFC reports there are more than 26,000 firefighters and emergency personnel on the front lines battling the blazes.

Weather conditions are improving in the wildfire zones of California, but red flag warnings covered most of Wyoming on Wednesday.

The fires have created unhealthy thick smoke which is blanketing cities downwind of the fires.

"Yesterday and today have been awful. Yeah, real bad, like you don't even want to be outside at all," said Jerry Ciganik, a resident of Truckee, California.

The smoke from California's Caldor Fire blocked out the sun in nearby Reno, Nevada. The smoke created air quality alerts, which forced officials to cancel school for 67,000 students.

Officials closed parks and beaches. Flights were canceled at the Reno-Tahoe Airport.

Nevada issued its first-ever Stage 3 Air Quality Emergency. Forecasts predicted the smoky conditions would not improve through the week.

"A lot of acreage is burning. Fires are burning in ways that nobody has seen before," said Porter.