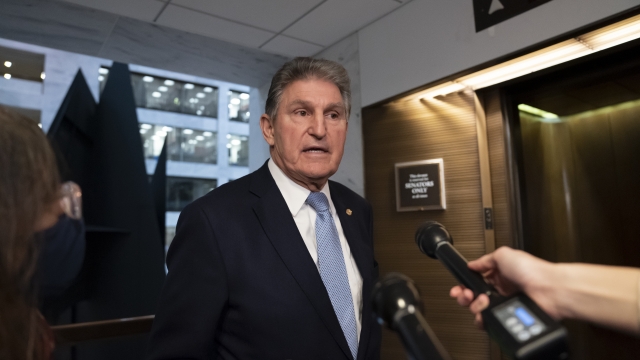 He's been one of the biggest roadblocks to Democrats in Washington and senior Democrats in his home state are not afraid to share their discontent.

NEWSY'S NATHANIEL REED: Are you disappointed in Sen. Manchin?

STATE DEL. MIKE PUSHKIN: I'm disappointed that they weren't able to reform the filibuster to get that very important bill.

But what West Virginia Sen. Joe Manchin's Democratic colleagues call obstruction, is seen by many in his home state as a winning formula.

"Seems like he's standing up for something that he believes in and I'm glad that he is. So, I think he's doing a great job," Charleston resident Steve Blackwell said.

Some residents still call him Governor Manchin — a position he held till 2010 — and he's the dominant force in West Virginia Democratic politics.

"We've had 40 years of Joe Manchin," State Del. Shawn Fluharty said. "He served us well, but the Democratic party currently is only identified with Joe."

Delegates Pushkin and Fluharty serve in the West Virginia House of Delegates.

Both are members of Democratic leadership in the state and previously campaigned for Sen. Bernie Sanders' bid for the presidency.

But Sanders' recent threat of supporting a more liberal primary challenger to Manchin has them unconvinced.

"Well, I think when you start looking at West Virginia — good luck as far as finding a primary challenger that would have any credibility at this point," Fluharty said.

And unlike Arizona, where the state's Democratic party voted to censure Kirsten Sinema over her decision to uphold the Senate's filibuster rules, West Virginia Democrats aren't convinced their public disapproval is the right move.

"A motion to censure is really just — it's a meaningless gesture," Pushkin said. "It really doesn't have any action. I think there's a lot of us who want to work with our senator."

In a state where Donald Trump won nearly 70% of the vote in 2020, few are convinced that a more liberal candidate could stand a chance here statewide.

"I think that he's unfortunately the only Democratic senator that will be elected in the foreseeable future," Charleston resident Lucas King-Cochran said.

Instead, some are urging their Democratic senator to reconsider changing the Senate's rules to pass voting rights legislation and are pressing him to support broader pieces of President Biden's Build Back Better Act, including the reauthorization of an expanded Child Tax Credit and paid family leave.

"They're popular in West Virginia, but you have to go to the voter and talk to them about it," Fluharty said. "I expect him to go back to the table and hopefully come out with pieces of that puzzle that we have that will benefit West Virginians."

And with Senate Democrats holding the slimmest majority in recent memory, Manchin told Newsy he thinks sticking to the middle will ultimately prevail.

REED: Does holding the Senate in 2022 concern you?

SEN. MANCHIN: Well, that's up to the people. You have to be moderation. Moderation is what people want. I can tell you that. You can talk to people here — they love the moderation. They love working together. We're going to do that.