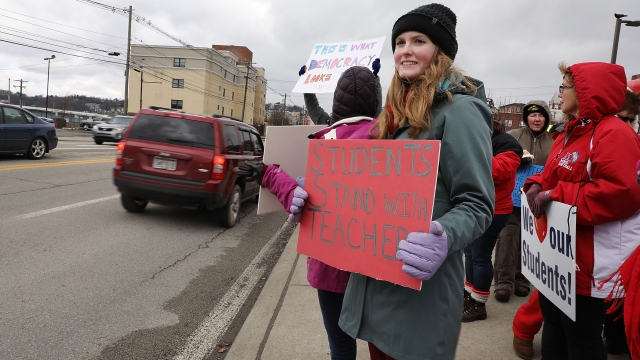 Union leaders said Tuesday night the strike will continue through Wednesday. They said although their trust "has been somewhat restored" by the Virginia House of Delegates' decision to table the bill, they're going to stay out one more day to make sure the bill is dead.

Earlier in the day, the House voted 53-45 to postpone the bill indefinitely, much to the satisfaction of the hundreds of teachers in attendance.

Teachers statewide began protesting Tuesday over a funding bill the Senate passed Monday night. The bill would have dedicated some state funds for private school vouchers and create charter schools, instead of investing that money into public schools. School voucher programs put state funds into a special account to help people who are eligible pay for private school.

The West Virginia branch of the American Federation of Teachers argued the bill "defunds public education [and] retaliates against teachers who stood up for their students last year."

Almost exactly a year ago, West Virginia teachers staged a walkout to protest rising health care costs that were lowering their wages and forcing them to get multiple jobs. That walkout was followed by a number of teacher strikes across the country.