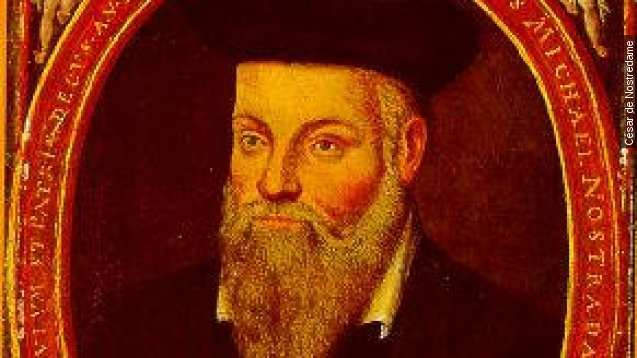 Californians, you can breathe a sigh of relief. A disaster you probably didn't even know was supposed to happen ... didn't.

The famous French dude who published prophecies in the 1500s, Nostradamus, apparently predicted there would be some sort of catastrophic earthquake in the future.

Taking his prediction to heart, a random YouTuber then claimed he was contacted by a spirit, which revealed to him the massive quake would be on May 28 in California.

Even our neighbors overseas were reporting on the tragedy that was or wasn't about to hit the good ol' US of A.

Some 500 years ago, Nostradamus wrote: "The trembling so hard in the month of May, Saturn, Capricorn, Jupiter, Mercury in Taurus: Venus also, Cancer, Mars, in Virgo, Hail will fall larger than an egg."

Huh? Sounds a little like bumbo-jumbo to us. But this YouTuber from the Netherlands showed the planetary alignments in this 25-minute video and tried to explain it all.

He also claims he warned about the devastating earthquake in Nepal five days before it hit.

But Californians awoke to find they were all still alive, disaster-free.

And the man behind the YouTube video did mention a lack of earthquakes Thursday morning on Twitter but hasn't commented after that, or how he was wrong about the 9.8 earthquake that didn't happen.

LA Weekly spoke to a seismologist who says 9.8 wouldn't exactly be plausible anyway: "The biggest we could have is an 8.3 that would rupture the whole length of the San Andreas fault."

The fact Nostradamus' name was tied in to the prediction may be one of the only reasons anyone really paid attention.

LiveScience says he's been credited with predicting the bombing in Hiroshima, the French Revolution and the first moon landing.

But he was apparently wrong about this one. If anyone wants to see what Hollywood thinks a superdisaster earthquake would look like, "San Andreas" is actually in theaters now.

Maybe Nostradamus was just predicting this movie would be made.

This video includes an image from César de Nostredame.