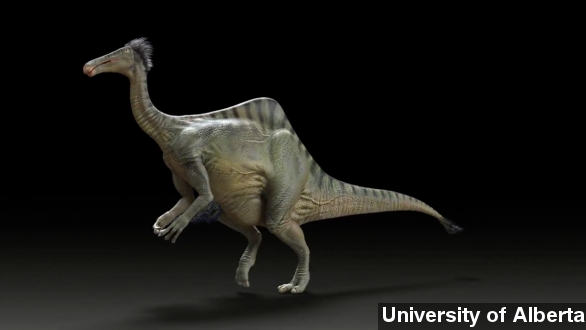 By Sebastian Martinez
October 23, 2014
You've probably seen some weird-looking dinosaurs, but have you ever seen one this weird? It's worth a look.
SHOW TRANSCRIPT

A dinosaur mystery 50 years in the making is finally solved, but the answer is a little baffling.

This is Deinocheirus mirificus, a 16-foot-tall omnivore first unearthed in Mongolia back in 1965. Or, as some are describing it: (Video via University of Alberta)

SPENCER BLAKE VIA KNIN: "It actually kind of looked like a cross between the hit cartoon dinosaur Barney and Jar Jar Binks from 'Star Wars.'"

We frankly don't see the Jar Jar Binks comparison, so here's our own stab at it, using the BBC's description. "It was huge" like Godzilla, "had a beak" like Big Bird, "a humpback" like Quasimodo, "and hoofed feet" like, uh, a horse. (Video via Buena Vista Pictures / "The Hunchback of Notre Dame")

The discovery of two skeletons in 2006 and 2009 was key in connecting that weirdly humped body to the original finding, which was just a pair of enormous arms. Those arms are the reason for the name Dinocheirus, which means "horrible hand," more or less. (Video via BBC)

SOHN JUNG-IN VIA ARIRANG: " ... a series of extra-long bones in its back that formed the hump. Researchers think that the long spine may have helped the creature balance and support its huge mass on its hind legs."

The researchers' findings, published in the journal Nature, also say Deinocheirus was probably omnivorous — fish remains were found in its stomach, despite its toothless beak being more suited toward a herbivorous diet.

As the Los Angeles Times' Amina Khan writes, the story of how researchers were able to get all the bones together is a long one. That's because bones from the 2009 fossil were actually poached and sold to buyers in Japan and Germany.

One aspect of the long story of Deinocheirus that's been a little lost in the coverage — this isn't actually the first time we've seen Deinocheirus' body.

Last year, the same scientists presented a very different-looking mock-up of the disproportionate dino at a conference in Los Angeles, before all the reassembly had been finished.