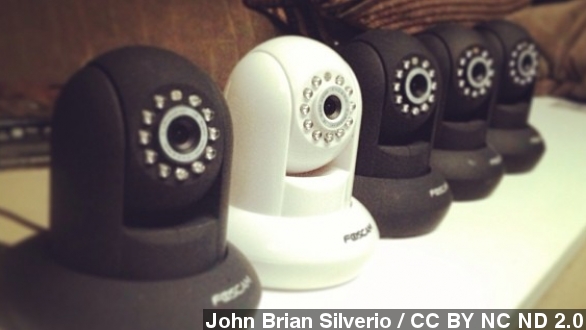 British authorities are warning the public about a Russian website that streams thousands of live webcams around the world.

The site includes webcam feeds of a variety of public places, such as businesses, but many show private residences. Several of the hacked cameras appear to be acting as baby monitors and show children sleeping in cribs. (Video via CNN)

Most of the cams are older models being used for security or to check on homes while the owner is away. The site also gives the location of each specific feed, and although they are coming in from all over the world — more than 4,000 feeds are from the U.S. (Video via Foscam)

It's possible to access to the feeds because their owners haven't changed the default username and password that came with the device, and in some cases, they don't even have a password set up at all. So some argue you can't technically call this a "hack" considering all the data needed to gain access to the cams is readily available on the Internet.

Sky News spoke with the site's alleged administrator, who said the purpose of the site is to show people how easy it is gain access to the cameras. He also said the site would be taken down "only when all cameras will be password protected."

U.K. Information Commissioner Christopher Graham told the BBC his department is working with Russian authorities to shut down the site, but people should not just sit and wait for the government to handle the situation.

"It is spooky. But after all, it is the responsibility of the parents to set a proper password if you want remote access," Graham said.

To get their webcam feeds removed from the site, all users have to do is reset their passwords.

This video contains an image from John Brian Silverio / CC BY NC ND 2.0.