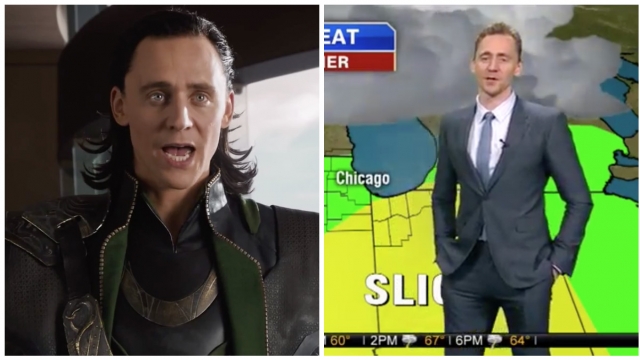 SMS
Weatherman Tom Hiddleston (AKA Loki) Blames Thor For Chicago Storms
By Cody LaGrow
By Cody LaGrow
April 1, 2016
The actor appeared on Chicago's Fox affiliate to promote a film, but slipped into his Marvel role during his weather forecast.
SHOW TRANSCRIPT

But instead of trying to pick up his bro's hammer, Hiddleston picked up a new profession at the Fox affiliate in Chicago on Thursday.

"There is this huge storm front coming in. And all that means is that Chris Hemsworth has taken his hammer and smashed it into the surface of the sky, and it's going to rain a hell of a lot," Hiddleston said.

Hiddleston hit viewers with the forecast while in town to promote his new Hank Williams biopic "I Saw The Light." If only Chris Hemsworth were in that film, too. We know exactly what we'd say to him.

This video includes clips from Marvel and Bron Studios.