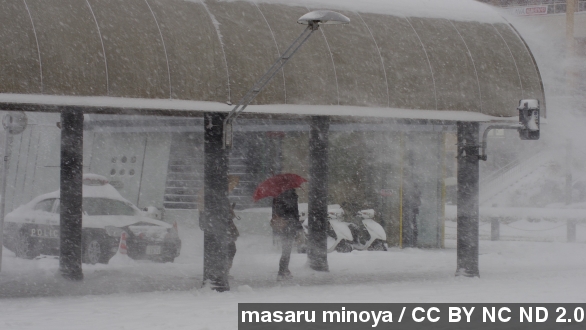 By Adam Falk
July 30, 2014
Health officials say 2,000 deaths occur each year in the U.S. due to weather, but it's excessive heat and cold that claim the most lives.
SHOW TRANSCRIPT

Extreme weather is killing roughly 2,000 people in the U.S. each year, according to a new study released by health officials Wednesday. (Via masaru minoya / CC BY NC ND 2.0)

But most of the deaths aren’t from floods and tornados. The U.S. Centers for Disease Control and Prevention reports the deadliest weather conditions are heat waves and cold snaps.

It took a look at weather-related deaths from 2006-2010. Of the more than 10,000 deaths reported, one-third of them were caused by excessive heat. Excessive cold was significantly more lethal, accounting for two-thirds of deaths.

The study found, older people, men, non-Hispanic black people and people living in lower-income areas had a higher risk of dying from both extreme heat and cold. (Via Matt DeTurck / CC BY NC ND 2.0)

That said, according to the study, the number of deaths attributed to weather is likely underreported.

For example, heat can exacerbate pre-existing heart problems. But it’s not likely heat would be listed as the cause of death in this case, even though it played a role. (Via Kullez / CC BY 2.0)

The CDC adds, “The frequency and intensity of all types of extreme weather events...is expected to increase in the future as a result of changing weather patterns.”

But that hasn’t stopped some from making predictions. A UK study released in February estimated that heat wave deaths in England and Wales could triple by the 2050s. (Via LiveScience)

We haven’t forgotten about hurricanes and thunderstorms. But it turns out, these types of weather events only accounted for 6 percent of weather-related deaths. (Via The Weather Channel)

To which a WQAD meteorologist speculates, “It is likely the rate of death for severe storms is decreasing due to accurate forecasting by Meteorologists and more attention by local news media.”

So then let us be the ones to tell you, be careful in the extreme heat this summer by staying hydrated and inside when possible. And when winter rolls around, layers and the indoors are your best friends.