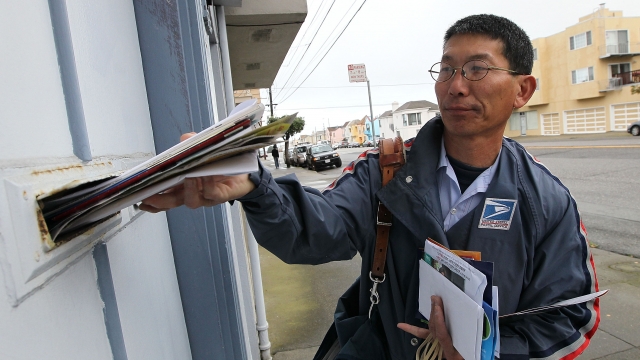 SMS
Weather Forces Postal Service To Suspend Some Mail Delivery
By Katherine Biek
By Katherine Biek
January 30, 2019
USPS said its employees will also not be collecting mail or packages in parts of at least 10 states Wednesday due to extremely cold weather.
SHOW TRANSCRIPT

The U.S. Postal Service might be willing to deliver your mail in the rain, snow and heat — but not sub-zero temperatures.

It announced it's suspending mail delivery in parts of at least 10 states Wednesday due to extremely cold weather. Areas affected include parts of Minnesota, Illinois, Wisconsin, Ohio, Michigan, Indiana, Iowa, Pennsylvania and the Dakotas.

As Newsy previously reported, some 220 million people in the U.S. are dealing with sub-freezing temperatures this week.

The National Weather Service has been issuing warnings about hypothermia and frostbite as temperatures in parts of the Midwest and Great Lakes regions are expected to continue hitting 20-40 degrees below zero through Thursday.

On Wednesday morning, Chicago's temperature plunged to -22 degrees, making it much frostier than both the summit of Mount Everest and parts of the South Pole. And meteorologists are warning Minnesota residents that wind chills could reach 70 below zero.

Along with not delivering the mail, USPS said its employees will also not be collecting mail or packages from businesses and residences.