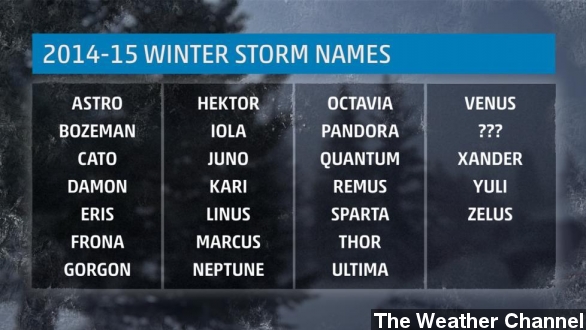 It's becoming a fall tradition: The Weather Channel puts out its list of winter storm names for the coming season, and critics attack, mock or ignore them.

On Wednesday, The Weather Channel announced its storm name list for the winter of 2014 to 2015. It includes names like Astro, Venus and Pandora.

TOM NIZIOL: "I kind of like Linus. It's got that Charlie Brown connection."

NIZIOL: "Yeah, that's going to hammer the region, isn't it?"

Yep, The Weather Channel has taken it upon itself to name major winter storms for the past several years. For the past two seasons, it's drawn the names from suggestions sent in by Latin students at Bozeman High School in Bozeman, Mont. (Video via KECI)

It's a controversial practice. No U.S. weather agency names winter storms, so The Weather Channel is basically making up the rules as it goes along.

Back when the practice started, Tom Niziol, who helps pick the final list for the channel, argued that naming a winter storm raises awareness, makes it easier to communicate with the public and helps people better prepare for severe weather.

And critics have long argued it does none of those things, and since only The Weather Channel uses the names, it might actually be confusing, given that every winter storm is accompanied by an explainer piece on why the network named Winter Storm Nemo or Winter Storm Gandalf.

The general consensus is that the move is mostly about "hype, ratings and money."

So now, every year people who oppose naming winter storms take a few shots at the network when the list comes out.

Mashable made fun of the names themselves, saying, with names like Gorgon and Hektor, "The list reads like a rundown of characters in a long-awaited Ghostbusters sequel." Hey, they're only high school students, Mashable.

This year's list is still incomplete. If you want a voice in which word The Weather Channel's anchors will have to say over and over this year, you can still vote on the "W" name. It's probably going to be Wolf, though.