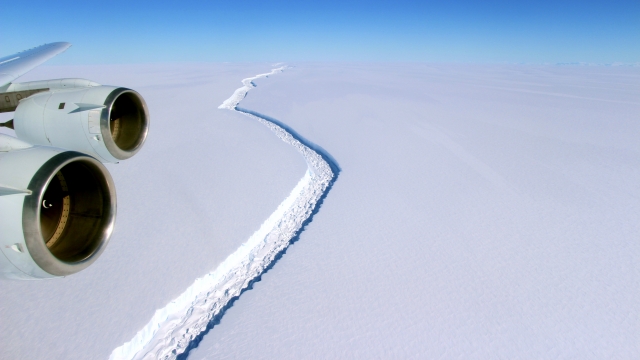 Researchers have seen changing temperatures break up parts of the Larsen ice shelf before.

There's a giant crack working its way through part of a huge Antarctic ice shelf. If it gets bad enough, a chunk of ice the size of Delaware might break loose. And researchers think they might know what's coming after that because they've seen it happen several times already.

In 1995, part of that Larsen ice shelf disintegrated into tiny icebergs. It was the first time researchers watched a shelf do that. Until then, they usually saw one big iceberg break off or just gradual melting. Scientists suggested the new behavior was related to warmer temperatures in the region.

In 2002, part of the shelf the size of Rhode Island became unstable and broke apart in a matter of months — again, probably thanks to local warming trends.

As more freshwater flows into the Atlantic Ocean, it weakens the Gulf Stream, and that could be bad news for the global climate.

Researchers think the current iceberg threat could be the first hint at a similar fate. They can't say yet if warming is the culprit this time or if this is some other natural event — but the outcome could eventually be the same: more melting.