We've Got Mites Living In Our Faces And So Do You 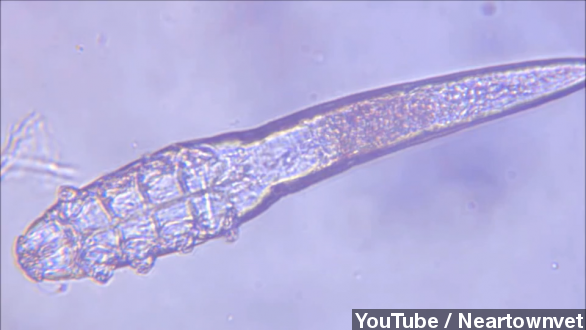 By Mikah Sargent
August 30, 2014
A new study suggests 100 percent of adult humans (those over 18 years of age) have Demodex mites living in their faces.
SHOW TRANSCRIPT

Look, we're really sorry to be the ones to have to tell you this, but you've got mites living in your face — Demodex mites to be precise.

According to a new study published in the journal PLOS ONE, "100% of people over 18 years of age appear to host at least one Demodex species." (Video via YouTube / TheDemodexsolutions)

Yeah, so there's that. Researchers at the University of North Carolina used a laboratory spatula to scrape the noses and cheeks of volunteers. They then placed the scrapings in mineral oil and inspected it for mites using a microscope.

And here's where things get interesting, if they weren't already. When they looked at their samples under a microscope, researchers found mites present in 14 percent of adults.

Instead of stopping there, however, the group went on to test for Demodex DNA. Because "these mites may occur in patches around the body," researchers wanted to test for traces of the mites in case they simply weren't testing in a currently inhabited region. (Video via YouTube / Yong Ming Por)

And we kind of wish they wouldn't have, because Demodex DNA was found in 100 percent of the adult samples.

Not much is known about the little critters — Metro notes scientists don't even know how they spread, but the theory is mom's transfer the mites "to their children during breast feeding." Of course, that wouldn't explain how children who aren't breastfed get the Demodex mites.

So again, we don't really know much about these little guys, or gals, or whatever they are.

But Business Insider put together a list of some things we do know about them. Here are a few of our, uh, favorites:
- "They can't poop, so they just fill with feces until they explode all over your face."
- "They feast on your face cells and oils."
- "The bacteria they spew out when they explode could be the cause of rosacea."

If there's any consolation in this whole thing, a writer for NPR points out the study is kind of humanizing in the end. "In a way, that 100 percent number is strangely comforting. Not only do I have face mites, but so does Benedict Cumberbatch. And Ruth Bader Ginsburg. And Beyonce."

O.K. Beyonce, I'll have my mites call your mites so we can all get together for lunch. (Video via YouTube / Neartownvet)