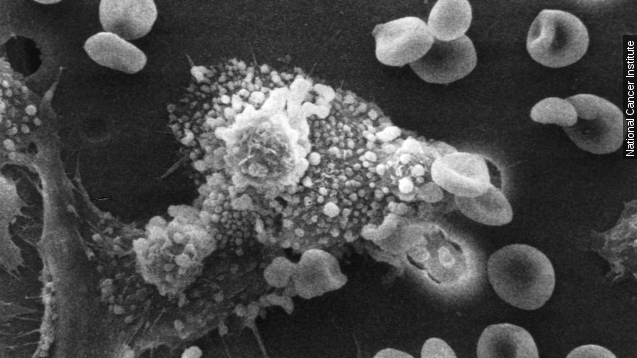 SMS
We're Slowly Recruiting Viruses To Treat Cancer
By Steven Sparkman
By Steven Sparkman
October 29, 2015
The FDA approved the first cancer-fighting virus this week, but it likely won't be the last. Viruses are now being tested on nearly every cancer.
SHOW TRANSCRIPT

When the FDA approved the first cancer-fighting virus for use this week, it began what you might call a new age in cancer treatment.

The treatment, manufactured by Amgen, is a special herpes virus engineered to attack melanoma cells while leaving healthy cells alone.

It's the first so-called oncolytic virus to get FDA approval, but it almost certainly won't be the last. There are dozens of clinical trials underway testing other viruses against other cancers.

Oncolytic viruses have gotten a lot of publicity, and some patients, like Stacy Erholtz, have seen incredible results.

"Seven weeks after therapy, all the tumors and any signs of cancer were gone," the Mayo Clinic reported.

The hype has sometimes even made the technique sound like a potential cure.

"Eventually, we may even be able to live life without having to worry about cancer," cancer researcher Patrick Lee said during a TED Talk.

But we're definitely not there yet. Amgen's new FDA-approved treatment didn't do much to improve patients' chances of survival, although there are hopes it can be made more effective.

One of the problems is the immune system. Oncolytic viruses work, in part, by causing the body's own defenses to attack cancer cells. But the immune system can also wipe out the helpful virus before it has a chance to do its job, unless doctors give just the right dosage and accompanying drugs. (Video via Boisgerault N. et al. / CC BY 3.0, Cancer Research Institute)

Nailing those factors down is the next step in the research, which really does sound like it merits the hype sometimes.

"We have done this for lung cancers, breast cancers, colorectal cancers, prostate cancers, pancreatic cancers ... just about any type of cancer you can imagine," Duke researcher Matthias Gromeier told CBS.

This video includes images from the U.S. Food and Drug Administration, the Centers for Disease Control and Prevention and the National Cancer Institute.