We're Not Saying It's Aliens, But What Is With This Star? 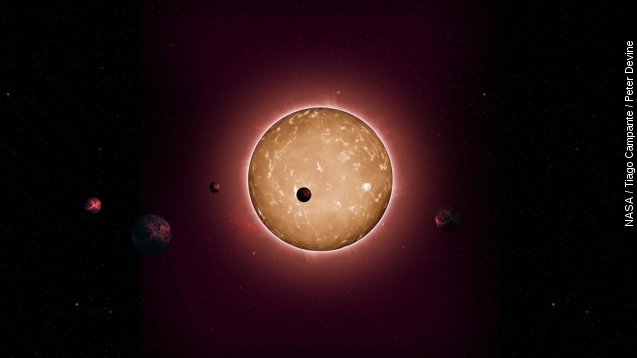 SMS
We're Not Saying It's Aliens, But What Is With This Star?
By Ethan Weston
By Ethan Weston
October 16, 2015
An unusual field of debris around a distant star has astronomers stumped, and some think it could be aliens.
SHOW TRANSCRIPT

Nearly 1,500 light years from Earth there is a star with the catchy name KIC 8462852, and scientists are trying to figure out what its deal is.

In 2011, astronomers picked up some weird readings, which suggested there is an unusual amount of debris orbiting the star: different-sized chunks moving at different speeds. When a star is young it's usually surrounded by such debris, but this star doesn't appear to be young. This has some scientists suggesting aliens. (Video via NASA)

Jason Wright at Penn State University told The Atlantic, "Aliens should always be the very last hypothesis you consider, but this looked like something you would expect an alien civilization to build."

Wright thinks it could be some kind of "swarm of megastructures" orbiting the sun. And while no scientists have mentioned the Dyson sphere by name, it sounds a lot like what is being described.

Freeman Dyson first proposed the concept in the 1960s: A Dyson sphere is a group of megastructures built around a star to harvest its energy. Such an engineering task would pretty much require an advanced civilization.

There are, of course, more mundane possibilites.

In her paper published about the anomaly, Tabetha Boyajian puts forward a few hypotheses, and finds each lacking except for one. It's possible that a star passed through the system, pulling comets inwards as it did so. (Video via SETI Institute)

Boyajian told New Scientist, "We were scratching our heads. For any idea that came up there was always something that would argue against it." (Video via NASA)

Boyajian hopes to know more soon. If things go well, astronomers will be pointing a massive radio telescope at the star by sometime in January to listen for radio waves which are considered a good indicator of intelligent life.