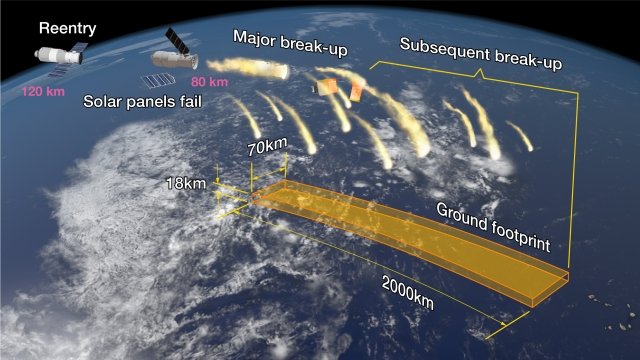 SMS
Why It's Hard To Know Where Or When China's Space Station Will Crash
By Evan Thomas
By Evan Thomas
March 27, 2018
When a spacecraft can't steer itself, buffeting from the atmosphere can make its course erratic.
SHOW TRANSCRIPT

Chinese space station Tiangong-1 is falling out of orbit, and even with just days to go, we still don't know exactly where or when it will happen.

Officials originally planned to de-orbit the satellite over the south Pacific Ocean, so any debris would fall in the water. But China lost contact with the station in 2016, meaning it lost any chance at guiding the station in. Now it's in an uncontrolled re-entry — at the mercy of gravity and Earth's atmosphere.

The air around Earth causes trouble for any satellite in a low orbit. The very upper reaches of the atmosphere are thin, but there are still enough air molecules to slow down spacecraft. Everything, from weather satellites to the International Space Station, has to regularly boost its altitude so it doesn't enter the atmosphere.

Since controllers can't get Tiangong to fire its engines, it's doomed — the air will slow it down more and more until it falls to Earth. 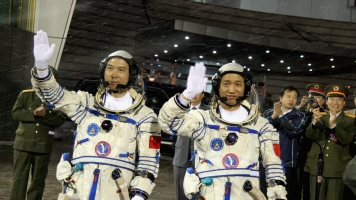 And if it's rolling or tumbling, the changing drag on the spacecraft will make it even harder to tell where it will land. All officials know for sure is it will fall somewhere in a band between 42.8 degrees north and south latitude — and they won't know exactly when to expect it until a few hours before it happens.

The good news is the station isn't large enough to be a significant threat. It's only about the size of a bus, and sky-watchers think most or all of it will burn up before any debris reaches the ground.