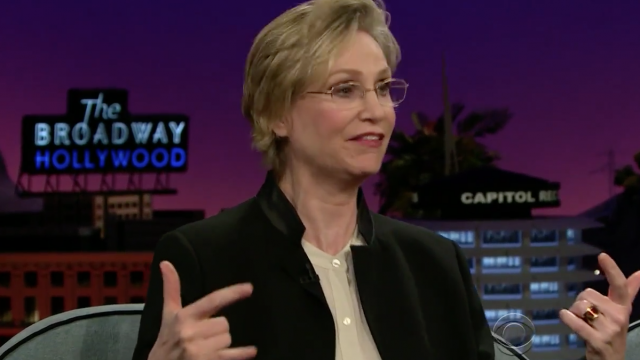 SMS
We Don't Know How To Feel About Jane Lynch Rapping Nicki Minaj
By Ben Lawson
By Ben Lawson
January 20, 2016
This is the second time Jane Lynch has busted out some Nicki Minaj lyrics on a late-night show, and we still don't know what to think about it.
SHOW TRANSCRIPT

Yup, that happened. The actress explained to "The Late Late Show" host James Corden that it's part of an act she does with "The Office'"s Kate Flannery.

Or she just really loves Nicki Minaj. Lynch rapped another one of her songs on  "Conan" a few years ago. (Video via Cash Money Records / Nicki Minaj)

Apparently, when Lynch isn't acting, she lives to spit rhymes at people.

"Not in your face!" Lynch said.

"No? Around and under your face?" Corden asked.