We Can Probably Guess What Rick Perry's Announcement Will Be 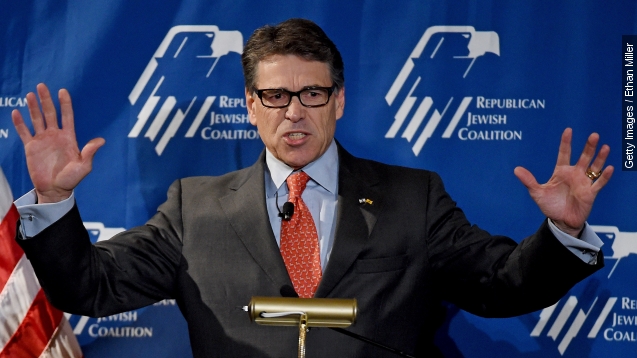 Texas Gov. Rick Perry says he has a "special announcement" in store for June 4 regarding his 2016 plans. And we all know what that is.

Perry made the announcement about the announcement through his wife, Anita's, Twitter account. His likely candidacy makes him the latest in a string of Republicans vying for the party's presidential nomination, including fellow Texan Sen. Ted Cruz.

Perry, of course, ran for president in back in 2012. He dominated polls in the time immediately after his late announcement but withdrew as his numbers steadily dwindled. A series of gaffes on the debate stage set Perry back, as did some polarizing campaign stances. (Video via C-SPAN)

"I'm not ashamed to admit that I'm a Christian. But you don't need to be in the pew every Sunday to know that there's something wrong with America when gays can serve openly in the military but our kids can't openly celebrate Christmas or pray in school," Perry said in a campaign video.

Perry assumed governorship in 2000 after George W. Bush left for the White House. Perry served as governor until 2014, when he announced he would not seek re-election.

His 14-year term is the longest in Texas gubernatorial history. And Perry cited his success as governor in his previous presidential bid. He called for the nation to be more like Texas, particularly in areas of personal freedoms and smaller government.

He told Fox News, "And that's the reason why states like Texas — our legislature only meets for 140 days every other year. I will suggest to you we keep the legislature out of town, we keep government agencies restrict in their size, their efforts, and Texans live with more freedom than might near any other state."

In his last run, critics said Perry's lack of experience on the national stage cost him on the campaign trail.

With one presidential bid already under his belt, what kind of success will Perry have this time? We'll find out after that "special announcement."