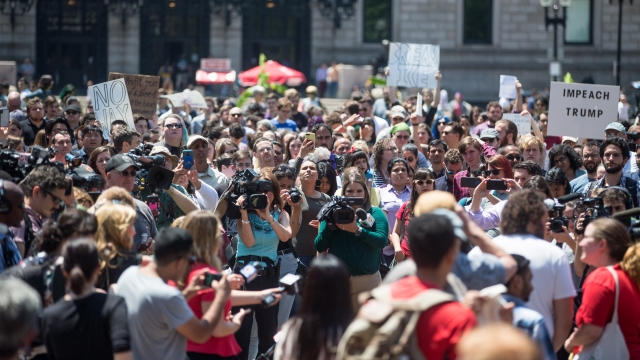 Hundreds of Wayfair employees in Boston walked out in protest over the company's furniture sales to migrant camp operators.

Employees staged the protest Wednesday afternoon after learning about an order by the nonprofit BCFS, which operates migrant facilities for the Department of Health and Human Services. Employees want Wayfair to stop doing business with BCFS and organizations like it.

According to the walkout's Twitter page, more than 500 employees signed a letter to the company's executives asking them to stop business with the nonprofit. The CEO reportedly refused, so employees walked out. They also wanted Wayfair to establish a code of ethics that "empowers Wayfair and its employees to act in accordance with our core values."

Wayfair reportedly told employees on Wednesday that it will donate $100,000 to the American Red Cross.

The Red Cross helps migrants by providing basic aid during disasters and international emergencies, among other services. It also says it responds to requests from government authorities and nonprofits that need help.

The @wayfairwalkout account praised the donation in a tweet, but said the Red Cross has "nothing to do with these ICE-operated facilities." Protesters want the profits from the BCFS sale to go to the Refugee and Immigrant Center for Education and Legal Services.

Border and immigration authorities have been criticized over poor living conditions at a Customs and Border Protection facility in Clint, Texas. Children were reportedly stuck in the temporary facility due to overcrowding in HHS shelters. Reports on their living conditions led to the transfer of hundreds of children to other migrant detention facilities.