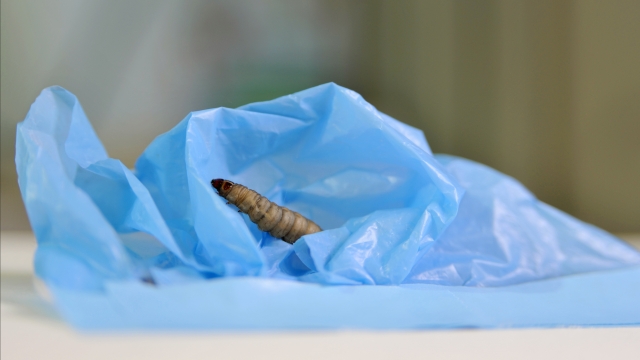 This tiny caterpillar could help solve one of the world's biggest environmental problems.

Meet the wax worm. This little larvae will one day become a wax moth.

Wax worms are typically used for fishing bait and are well-known for wreaking havoc on beehives by eating their wax combs.

But as one scientist at the Institute of Biomedicine and Biotechnology of Cantabria found, they also like to eat plastic. A lot.

Federica Bertocchini first noticed the caterpillars' affinity for plastic while she was cleaning up a wax-worm infestation in a beehive she keeps at home.

She put the wax worms in a plastic bag, tied it shut and continued to clean. But it didn't take long for the worms to chew through the plastic and escape.

From there, Bertocchini teamed up with researchers from the University of Cambridge to study just how well these little guys can munch away plastic.

They found 100 wax worms could break down 92 milligrams of polyethylene in just 12 hours.

Researchers say factories produce about 88 million tons of polyethylene each year for products like plastic shopping bags. And some of those products can take up to 400 years to degrade in garbage dumps and landfills.

But one of the study's authors told the BBC: "The caterpillar will be the starting point. ... We hope to provide the technical solution for minimizing the problem of plastic waste."