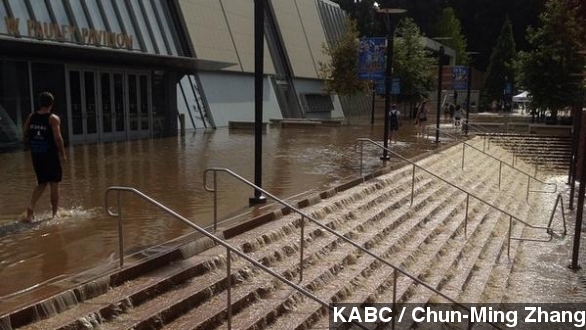 By Matt Moreno
July 30, 2014
The water main break sent water 30 feet into the air and caused millions of dollars of damage to the UCLA campus.
SHOW TRANSCRIPT

Crews are still cleaning up after a water main break at UCLA unleashed millions of gallons of water on an unsuspecting campus.

The break happened around 3:30 p.m. local time on a street just north of the UCLA campus — shooting water about 30 feet into the air and sending an estimated 8-10 million gallons onto the campus. (Via KCAL)

"The UCLA Bruins football field underwater. Four buildings on campus heavily damaged, including the historic Pauley Pavilion, which had just undergone a more than $100 million renovation." (Via NBC)

The water was so bad that authorities even had to perform some rescues.

"​The raft rescues took place when two parking structures filled with water and many car owners couldn't get their vehicles out in time." (Via CBS)

But while it was a dire situation for some, a few students made light of the flash flood. You can see some pulling out boogie boards and riding around in this video from the university's newspaper The Daily Bruin.

Now UCLA is tasked with the massive cleanup that will likely cost the university millions.

It took officials from the Los Angeles Department of Water and Power more than three hours to stop the water. The Los Angeles Times reports that fueled many questions from reporters on whether or not that was a quick enough response to the disaster.

As for the damage, ESPN's Jeff Goodman tweeted that Pauley Pavilion, the university's basketball arena, was "likely ruined" due to the water.

All this comes as California is in the midst of a drought. Officials have put restrictions on what California residents can and cannot use water on and have even imposed fines for improperly using water. (Via Time)

And, to add insult to injury, some Twitter users pointed out that the university's automatic sprinkler system turned on as the crews were trying to shut off the millions of gallons of water flooding campus. (Via Twitter / @DailyBruin)

Officials still haven't figured out a cause for the break, but multiple outlets report the water main was at least 90 years old. There's no timetable as to when all the cleanup could be completed.