Ceres Has Been Hiding Water Ice In Its Darkest, Coldest Craters 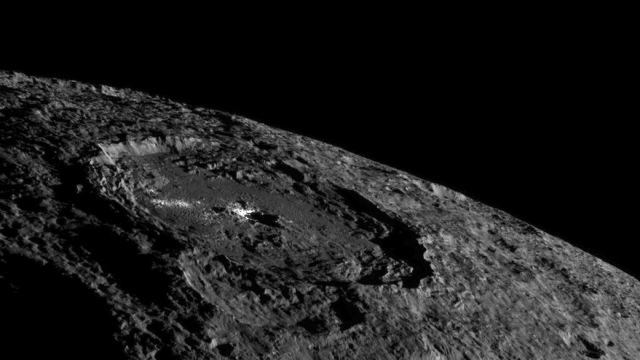 SMS
Ceres Has Been Hiding Water Ice In Its Darkest, Coldest Craters
By Evan Thomas
By Evan Thomas
December 15, 2016
Most frozen water on the unshielded asteroid Ceres evaporates away thanks to the sun, but some craters don't get any sun.
SHOW TRANSCRIPT

Ceres, the largest asteroid in the asteroid belt, joins the moon and Mercury as the only known airless worlds with frozen water on the surface.

The stuff has been venting into space, and traces of it have been leaking from the interior for a while — and now, we think there's a lot of it lurking just below the surface, too. But water ice doesn't last long in the open on Ceres. Thanks to the harsh sunlight and lack of an atmosphere, it evaporates — most of the time, anyway.

New scans from the Dawn spacecraft show in colder areas at the poles, in deep craters where sunlight doesn't reach, this ice can exist on the surface, after all.

There are more than 600 craters in permanent shadow near Ceres' poles. Scientists found 10 with ice in them. Now, the question is how the water got there in the first place. It could be thanks to cryovolcanoes, which erupt with ice and other materials that could eventually land in the upper latitudes. Or it could be impacts from other asteroids digging the water out of deposits below the surface.

Either way, it's good news for our exploration of the solar system. Now, we can learn more about how and where this ice shows up — and maybe use it to support human expeditions in the future.