Water Discovery On Small Planet Could Be Key To Earth 2.0 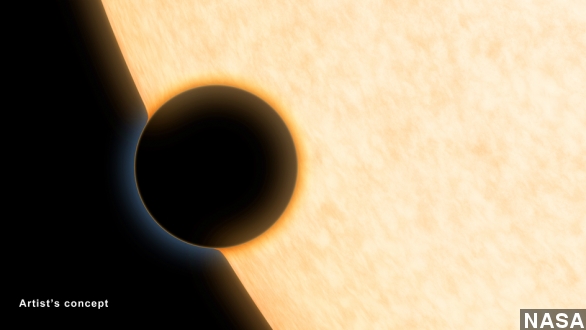 SMS
Water Discovery On Small Planet Could Be Key To Earth 2.0

By Lauren Zima
September 25, 2014
Scientists have discovered traces of water in the atmosphere of a distant, Neptune-sized planet.
SHOW TRANSCRIPT

For the first time, scientists have found traces of water on a planet smaller than Jupiter.

The planet, named HAT-P-11b, is about the size of Neptune. And here's why it's important: before this planet, scientists had been stuck when it came to smaller, warm planets.

They'd all been covered in clouds, and researchers couldn't see the planets' atmospheres to study them. Researchers were starting to think all small, warm planets formed with that thick cloud cover.

But this planet, about 120 light years away, has proved otherwise. Now, it is not thought to support life — it's a ball of gas. Researchers used the Hubble space telescope to check it out.

And here's what's really key —The Guardian quotes the study's first author: "Although this planet is not classically habitable, it reveals to us that when we find Earth 2.0, we will be able to use this technique, transmission spectroscopy, to understand its atmosphere and determine the quality of life available on its shores."

For comparison's sake, this planet is roughly four times the diameter of Earth. And size does matter. The more scientists understand about water on different planets, the more they can know where and how to search for it.

The BBC quotes one researcher who didn't work on the findings, but helps explain their importance, "We'd like to be able to look at an Earth-sized planet and measure its gaseous composition. So this is a step on the ladder; we're stepping down the ladder towards smaller and smaller planets."

The findings were published in the journal Nature.