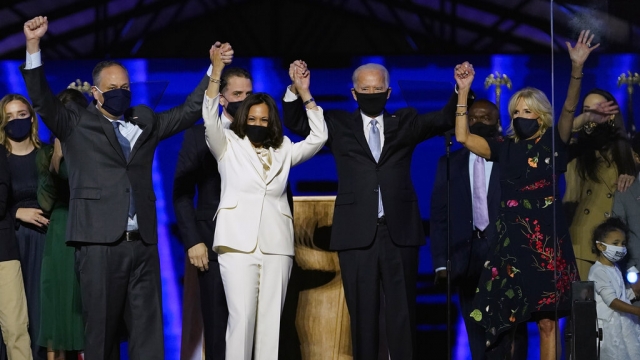 A sign of the times, and a symbol of just how strange and scaled back this year’s festivities will be. With no lavish balls or massive travel, the ever-growing inauguration price tag should go down this year, right?

Maybe, maybe not. The Biden inaugural committee is asking donors to help meet "ambitious fundraising goals." According to the donation website, the committee will accept corporate donations up to $1 million but refuse money from lobbyists and the oil industry.

"I think you're going to see something that's closer to what the convention was like than the typical inauguration," said President-elect Biden.

This summer's Democratic National Convention cost about $57 million for a week’s worth of mostly virtual festivities. On Inauguration Day, the swearing-in ceremony and much of the security is paid for by taxpayers and the parade will be mostly virtual this year.

We asked the inaugural committee why it needed hefty sums for this year’s downsized festivities and for their estimated costs. They received our request for comment but didn’t reply to our questions.

It's a growing concern for government watchdogs who've watched inaugurations grow over the years.

Presidents Kennedy and Johnson during their swearing-in ceremonies.

"It's basically throwing money at the feet of the President. So they can endear themselves to the President. The biggest problem is where that money comes from and what they want in return," Craig Holman, government affairs lobbyist with Public Citizen, told Newsy

Public Citizen and 50 other progressive groups sent a letter to Biden’s inaugural committee encouraging them to forego corporate cash,  as President Obama did in 2009.

The move would be a juxtaposition from President Trump, who raised a record-breaking $107 million which his team used for things like $10,000  in makeup for aides,  $1 million on events at the Trump Hotel and $57 million for event planning by companies owned by family friends.

Spending from the Trump inaugural committee has prompted federal investigations and calls for more regulation. There are very few rules limiting who can give money or even if the money has to be spent on the inauguration at all.

"Biden had the opportunity to return the whole inauguration process back to the noble era of Thomas Jefferson. And instead, he chose not to do that. I suspect most of the money will end up being, you know, given back to charity because he can't spend that kind of money," said Holman.

Legislation that would’ve required committees to disclose exactly where the money was spent died in the Senate. One thing the Biden team is doing differently: releasing the names of all big donors before the inauguration. Currently, the law doesn’t require disclosures until after the event.