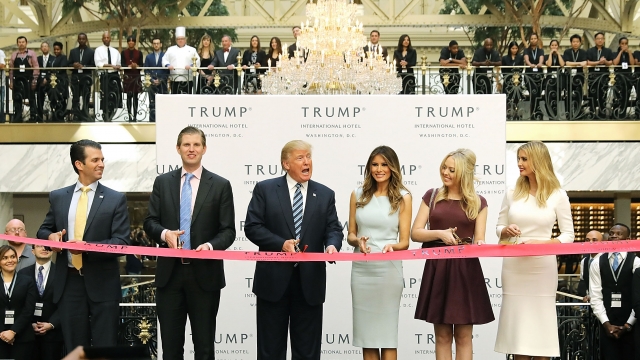 SMS
A Watchdog Group Is Planning To Sue Donald Trump Over Foreign Payments
By Briana Koeneman
By Briana Koeneman
January 23, 2017
Citizens for Responsibility and Ethics in Washington is accusing Trump of letting his businesses accept payments from foreign governments.
SHOW TRANSCRIPT

A liberal watchdog group is accusing Donald Trump of violating the Constitution.

Citizens for Responsibility and Ethics in Washington, or CREW, is filing a lawsuit against the president for allowing his hotels and other businesses to accept payments from foreign governments.

CREW claims Trump is in violation of a provision in the Constitution known as the Emoluments Clause, which bans payments or gifts from foreign powers.

And the group says Trump has been receiving those payments from "guests and events at his hotels, leases in his buildings, and valuable real estate deals abroad."

CREW's executive director said in a statement: "It was our hope that President Trump would take the necessary steps to avoid violating the Constitution before he took office. He did not. His constitutional violations are immediate and serious, so we were forced to take legal action."

Earlier this month, Trump announced he was handing over management of his businesses to his two adult sons, Donald Trump Jr. and Eric Trump. But Trump still retains ownership.

According to The New York Times, Trump's lawyers argue the Emoluments Clause is meant to prevent officials from accepting special treatment or gifts from a foreign power. They say it doesn't apply to "fair-market payments," like a hotel room bill.

The New York Times says CREW's lawsuit will ask a federal court to order Trump to stop taking payments from foreign governments. The group is not seeking any monetary damages.