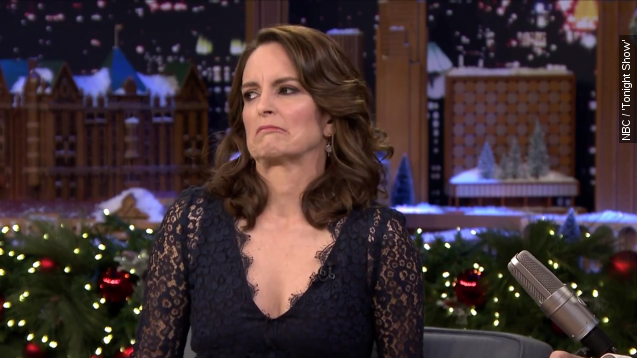 SMS
WATCH: Tina Fey Is Pretty Terrible At Celebrity Impressions
By Ben Lawson
By Ben Lawson
December 15, 2015
Tina Fey and Jimmy Fallon took turns doing celebrity impressions on "The Tonight Show," and the results were so bad they were funny.
SHOW TRANSCRIPT

Tina Fey has many talents, but doing impressions isn't one of them.

"Do your Robert de Niro," said Jimmy Fallon on "The Tonight Show."

"You talking to me?" Tina Fey replied.

So, of course, Fey and Jimmy Fallon took turns doing random celebrity impressions on "The Tonight Show," and the results were some hilariously awful moments.

"Don't even get me started about selfie sticks," Fallon said.

"It's either 'Sling Blade' or Morgan Freeman," Fey said.

Well, at least Fey is pretty darn funny when she's not doing impressions. Fey was on "The Tonight Show" promoting her buddy comedy with Amy Poehler, "Sisters." It hits theaters Dec. 18.