Watch This Gigantic Gator Saunter Across A Florida Golf Course 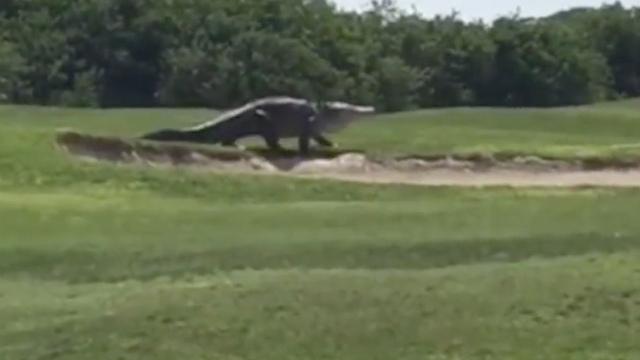 There are gators, and then there are GATORS.

A group of golfers in Palmetto, Florida, had an encounter with the second kind of gator recently and took this video as the massive reptile sauntered across the course. Newsy's partners at WFTS obtained the video from Charles Helms, who posted it to his Facebook page May 25.

"The guy who's taking that video right there is pretty brave because those gators are pretty quick. ... What if he decides, 'I'm hungry,'" WFTS' Deiah Riley said.

"Hold onto your butts!" said a character in "Jurassic Park."

Helms said the gator appeared to be at least 14 to 15 feet long. The largest alligator ever recorded in Florida? 14 feet 3.5 inches. This one may have it beat.

"It's not just big. It's yuuuge! Huge! Huge," Jimmy Fallon said while impersonating Donald Trump in a sketch.

Viewers on WFTS' Facebook page were definitely taken aback by the monster gator. Some commenters said the thing didn't even look real, and others cautioned anyone who thought it'd be a good idea to get close.

The video has been viewed over 3 million times and shared by over 60,000 users on Facebook.

This video includes clips from NBC / "The Tonight Show" and "Jurassic Park" / Universal Pictures and an image from Everglades NPS. Music provided courtesy of APM Music.