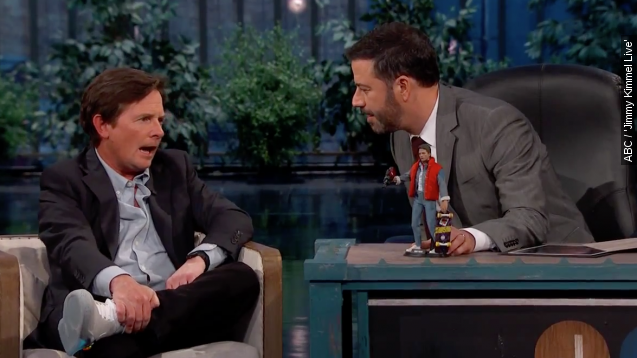 "Back to the Future" day has turned into the unofficial holiday that just won't quit. But it did result in some pretty cool movie swag, which Marty McFly himself touted on "Jimmy Kimmel Live." (Video via Universal Pictures / "Back to the Future: Part II")

"The one thing, originally, they had this thing going right up my ass. So I said that's gotta be redesigned so it's the non-violated Marty McFly," Fox said.

And, in case you were wondering, those shoes Michael's wearing are exactly what you think they are.

"Power laces, all right!," Marty McFly said in "Back to the Future: Part II."

Michael was wearing a pair of the self-lacing Nike Mags the company is putting out in honor of the movie. Too bad the rest of us have to wait until 2016 to give them a try.