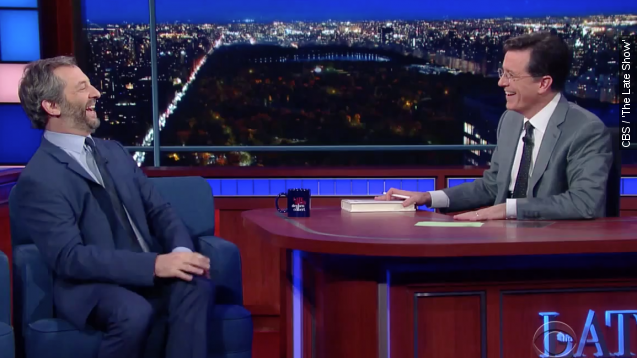 SMS
WATCH: Judd Apatow Explains Why He Doesn't Trust Exercise
By Ben Lawson
By Ben Lawson
November 13, 2015
Apparently, Judd Apatow is just like the rest of us when it comes to staying in shape. He told Stephen Colbert on "The Late Show" he hates exercise.
SHOW TRANSCRIPT

Apparently, Judd Apatow is just like the rest of us when it comes to staying in shape.

"If a guy is jogging, if a 40-year-old man is jogging with his shirt off, I always have the same reaction: 'Look at that douche bag,'" said Judd Apatow on "The Late Show."

Yup, Judd hates exercising. And as he explained on "The Late Show," it's because he just doesn't have faith in breaking a sweat.

"You don't think the science is in on sit ups?" Stephen Colbert said.

But, fortunately for Judd, his job doesn't require a killer gym body. In case you forgot, he's is the funny man behind nearly half the movies that made you laugh from the last decade or so.

And he's not done making us giggle. He also has a book for sale, and is going to be doing standup for the first time in 20 years at Carnegie Hall.