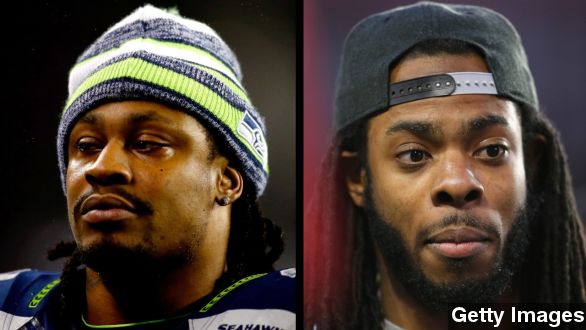 SMS
Watch For Seattle's Lynch, Sherman On Super Bowl Media Day
By Danny Matteson
By Danny Matteson
January 26, 2015
Seattle's Marshawn Lynch and Richard Sherman have had some unusual interactions with the press over the past few years.
SHOW TRANSCRIPT

With the NFL's Super Bowl media day upon us and both the Seahawks and Patriots ready to take fire from the press, we could be in for some interesting interviews.

Especially with these two guys involved. Seattle's Marshawn Lynch and Richard Sherman have made for some of the more colorful media interactions in the past few years.

Richard Sherman, of course, really blew up after really blowing up during an interview with Erin Andrews after last year’s NFC championship game. Essentially, talking some trash about 49ers receiver Michael Crabtree.

That landed him this Beats commercial.

But Sherman's gamesmanship started well before that.

You might recall Sherman tweeting "U Mad Bro?" at Tom Brady after the Seahawks beat the Patriots in 2012. (Video via Fox Sports)

That's definitely something to watch as the Seahawks prepare to play the Patriots again. (Video via Fox Sports)

Since the Erin Andrews moment, Sherman hasn’t shied from the public eye, and, if anything, has embraced it in some pretty bizarre ways.

Earlier this year Sherman conducted a press conference with teammate Doug Baldwin — and a cardboard cutout of Baldwin, calling out the NFL for fining teammate Marshawn Lynch. Just … take a look.

“No, they sure wouldn’t have,” said Baldwin.

And most recently, got the Super Bowl trash talking started early with a talking llama wearing sunglasses.

"How ready are you for Tom Brady?" a reporter asked.

Yeah, we don’t know about that.

Of course, on the complete opposite side of the coin is Seahawks running back Marshawn Lynch, who is notoriously coy with the media.

For example, at last year’s Super Bowl Media Day, Lynch spoke with the media for a whole six minutes before leaving his podium.

After dodging the media the first time, he was warned that he would be fined $50,000 if he refused to speak to the media in the future. On his second offense, he was fined that amount plus $50,000 more, following a loss to the Chiefs this season.

Most of the time when he does speak to the media, it has been to avoid fines, which has made for some slightly surreal interviews.

And in December, he thanked reporters for their questions without bothering to answer them.

A reporter asked, "Marshawn, can you describe the 79-yard touchdown run?"

Lynch said, "Thanks for asking."

"How about the stomach issue early in the game?"

"I appreciate you asking about my stomach. Thank you."

Of course, as Sports Illustrated has it, Sherman is reportedly giving Lynch some Media Day advice. What that will look like, we have no idea.