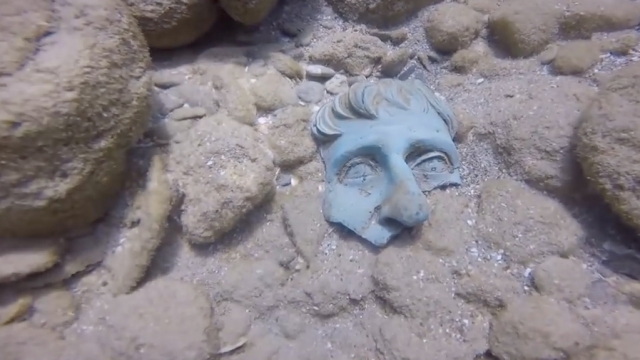 Divers discovered remnants from a 1,600-year-old shipwreck off the coast of Israel.

The divers stumbled across a sculpture partially buried in the ocean floor 30 miles from Caesarea.

That discovery led to a treasure-trove of ancient Roman artifacts. The Israeli Antiquities Authority examined anchors from the ship, water jugs, fragments of full-size statues, smaller sculptures and lamps, including one of the Roman sun god Sol.

The discovery also yielded two large clumps of coins, which helped give experts an idea of when the ship sank. Two Roman rulers depicted on the coins helped researchers place the shipwreck between A.D. 300 and A.D. 500.

Experts can't say for certain what caused the ship to sink. They theorize it tried to anchor itself in place during a storm but ended up smashing against nearby rocks and a seawall.

Weirdly enough, winding up on the ocean floor might have helped the relics survive the last several centuries. Experts believe the ship was taking them to be melted and recycled.