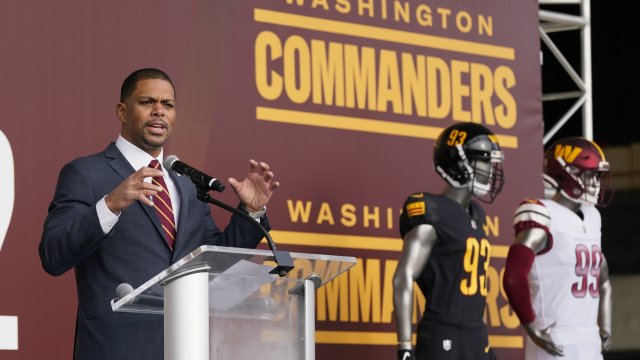 SMS
NFL's Washington Football Team Changes Name To Washington Commanders
By Cat Sandoval
By Cat Sandoval
February 2, 2022
The new name was unveiled Wednesday, two seasons after the team dropped its old name over criticism that it was offensive to Native Americans.

"They're doing this for various reasons, and they describe that this is rapid, irreversible and happened quickly," she said. "No, it really didn't. This took a long time to come about. And you can look to a lot of Native people who've been voicing their opinions and their suggestions."

This comes after other teams have dropped Native American nicknames — notably, the Cleveland Indians. Generally, when teams change their names there are some pitfalls.

It's a disruption of consistency that might shake up some of the fan base. But, sports business expert Marc Ganis says the Washington team fans had enough time to process the change.

"One of the great things about sports is that affiliations and love and passion for particular teams often passed down from generation to generation," Ganis said. "But that tends to get disrupted if a team changes its name."

After all, the team used a generic name for 2 years: the "Washington Football Team." That extra transition period has its benefits.

"This extra time period, I think it's gotten even the most hardcore long term fans gotten them used to the fact that their prior name is not going to be ever brought up again," Ganis continued.

In Washington, the racist slur was used for more than 80 years. Some Native Americans have argued Native nicknames reduce them to caricatures and stereotypes. The death of George Floyd and protests around the world sparked conversations about racial justice and representation. And Native American organizations — alongside sponsors like FedEx & Nike — pressured for change. And while it can seem like a win over the NFL and a victory for respect for Native people, some think more should be done.

"There is no apology," Roy said. "That's one thing i was looking for was some story behind this change. What are people going to know or think about when the name change is announced?"

Still, there are other sports teams that are holding on to their names. The NHL's Chicago Blackhawks and the NFL's Kansas City Chiefs. There's baseball's Braves and their "Tomahawk Chop" in Atlanta where team officials cite a working relationship with local Native American organizations. The National Congress of American Indians though, considers the name and the chop offensive.

When it comes to Washington Commanders, a rebrand can also be good for business.

Pressure to rebrand stereotypical names and Native mascots extends beyond pro sports. The NCAI says there are 40 school districts in the U.S. with Native American nicknames.