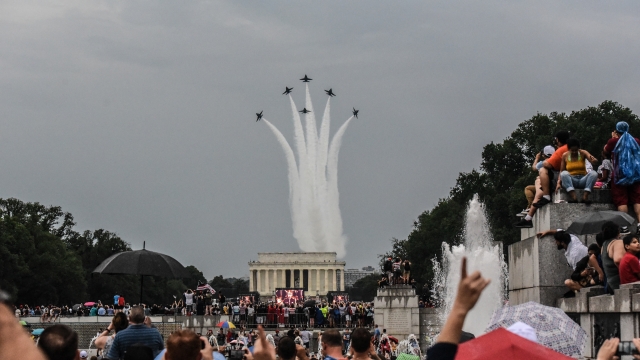 President Trump got this grand public event and a July 4 speech on the National Mall.

And the White House produced this promotional video:

"Together we are part of one of the greatest stories ever told: the story of America. It is the epic tale of a great nation whose people have risked everything for what they know is right and what they know is true."

Now, Washington, D.C., wants its reimbursement. The president's "Salute to America" celebration cost the city $1.7 million. And D.C. Mayor Muriel Bowser says a special fund to provide security and protect residents and visitors at public events will have a shortage of $6 million by the end of September.

In a letter to President Trump on Tuesday, Bowser said her city performs "the unique task of providing daily security to our federal leaders and facilitating security at large national events." She asked the president for his "commitment to reimburse the District for our public safety support to the federal government."

Federal funds, directed by Congress and the White House, are normally set aside to reimburse a city fund for the District's public safety costs related to its function as the capital. Just two years ago, the fund covered $7.3 million in costs of President Trump's 2017 inauguration. Its total annual expenses topped $24 million, but federal reimbursement was less than $15 million.

Meanwhile, President Trump says he's looking forward to a 4th of July encore on the National Mall next year. He called it a "wonderful day for all Americans" that he hopes to repeat for "the foreseeable future."