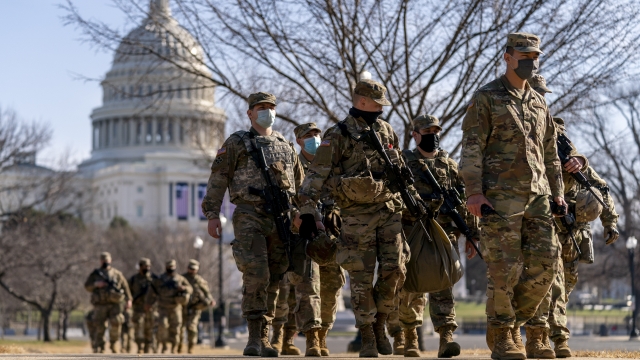 I'm Kellan Howell in downtown D.C., just a few blocks from the White House, where street closures and other security measures are already being ramped up a week out of Inauguration Day.

As you can see behind me, officials have already started blocking off streets with these large kind of cinder block barriers. Now this is pretty typical of an inauguration, but they put these roadblocks in place a week before inauguration day. That’s a lot earlier than we’ve seen in recent years.

I'm Nathaniel Reed, outside the Capitol. Typically this area is open to tourists right here on the mall in front of the Capitol, but right now there is a seven-foot, non-scalable barricade that's been installed since early this week.

There are plenty of armed National Guardsmen here trying to protect the building. You can see them anywhere in the capitol," Reed said. "There are still ways to get in there, specific entrances and exits. But at this point, access here is pretty restricted all because of the protests just over a week ago here at the capitol.

I'm Stephanie Liebergen outside the U.S. Naval Observatory in Washington D.C. Now you can see behind, the guard posts and the wrought iron fence — that is always here as protection for the Vice President’s residence. Now the chain link fence you can see behind me? Much taller than I am and the concrete barriers on the ground, that's an added level of protection that was put in just the last couple of days.

Within a block of the White House, you are seeing a lot of buildings and businesses and restaurants that are boarded up kind of in anticipation of what could happen next week on Inauguration Day.

I'm Amber Strong in Alexandria, Virginia. For those of you don't know, Alexandria is right outside the city. But as you make your way closer into D.C., particularly as you get to around to the Arlington area, is where you start to notice a police presence along the side of the interstate. As you get closer to the city, that only increases.

These are all expected to stay in place through the inauguration next week as they continue to ramp up security ahead of Joe Biden being sworn in as the 46th president.