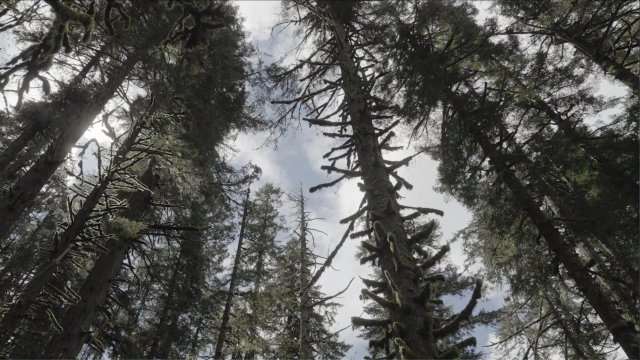 The Pacific northwest hills are carved with clearcuts, and forests are valued for the lumber they produce. But as Washington passes a grim milestone, with forests covering less than half the state for the first time in history, a changing climate is forcing land managers here to re-evaluate that calculus.

"We’re the evergreen state," said Hilary Franz, Washington state commissioner of public lands. "It's our identity, and we're unbelievably blessed with millions of acres of forest land that are some of the highest carbon sequestering natural resource that we have in the country."

Franz recently announced a plan to pull 10,000 acres of state-owned forests from logging contracts, banking on the fact that in a warming world these trees are more valuable living than as lumber.

"These were highly ecologically valuable forests because of the size of the trees," Franz said. "The location, the carbon richness of it — and they were about to be cut and harvested."

Because of their imminent demise, the simple act of saving these trees can be sold as carbon offset credits — essentially quantifying how many tons of carbon the trees are storing in their trunks, branches and roots, and then selling that as credits on the voluntary carbon market. Companies can then buy those credits to offset, or cancel out, harder to achieve emissions reductions from things like air travel and trucking. The idea being an overall net reduction, or at least balancing out, of total greenhouse gas emissions.

Franz says by selling carbon credits instead of lumber, the project will still generate tens of millions of dollars for schools, colleges and critical local services like libraries and hospitals. Services that are now funded by logging those same state trust lands.

"This is a new generation project," Franz said. "No public lands in the nation has done this right. We're pushing the needle on the value of that true preservation, and so we're going to learn."

The mature trees in the Pacific northwest forests absorb carbon dioxide from the atmosphere and store it in their trunks. Until now, that hasn't been recognized economically, but it's only the beginning of a long list of benefits that come with preserving the forests.

Beverly Law, an expert in carbon sequestration dynamics and a professor emeritus at Oregon State University, says what’s happening in Washington is the beginning of what she hopes will become a larger movement.

"They're doing a fantastic job," Law said. "I'm thrilled about it, and I hope Oregon takes notice."

Through her research, Law has proposed much wider protections for the temperate rainforests of the Pacific northwest still vulnerable to logging. She calls them "strategic forest preserves," for storing carbon and protecting species diversity.

"You look at the Pacific northwest, and you look at the whole western U.S. map," Law said. "It just stands out as being — these are the forests to protect. And we've done the analysis, we've looked at how much carbon is in these forests and what is the biodiversity, the number of metrics of plant and animal species, and we could be doing so much more than what's happening right now."

She says protecting forests are essential for meeting global climate goals, and unlike other, often engineered, strategies for cooling the planet, there’s no complicated or costly technology involved.

"This is free," Law said. "You just let it grow. These trees are doing their job right now, and they have been for hundreds of years. So it only makes sense when you look at it from that kind of standpoint. Well, let them continue doing their job because it won't cost us very much to do that compared to developing technologies and getting them broadly distributed globally. That's decades. We don't have decades."

But the logging industry isn't buying it.

"When you start removing forests and trees from the land base, it has ripple effects, and we need to understand those ripple effects," Travis Joseph said.

Joseph heads the American Forest Resource Council, which represents mills that purchase timber from public lands. He says even with carbon markets, the economic toll on local logging communities is too high.

Sell that carbon in a market, Joseph says, and you’ll get maybe $40. But sell it as lumber and the value shoots up to $425.

"So $40 for a community versus $425 for a community, and you're still getting the carbon benefit of growing the trees, harvesting the trees, replanting them again," Joseph said. "So those are the some of the questions that we're really getting at is, how have we done the financial calculations here? Do they really make sense for the hospitals, the schools, the ports, the counties that are getting that are getting this critical you know, public supply of financing? And I think just in that simple example that I'm explaining, you know, at least highlighting that we need to do some more work on this."

Joseph says with national forest all but removed from logging and almost half of the 2-million acres of state forest land set aside for protection, the industry is on its last breath.

In the meantime, public pressure to do even more to save these remaining forests is mounting, especially among young people.

"I'm really worried about the future, and there's so little action happening right now on climate change now that me and my generation will have to live with whatever is left behind," Matt Stevenson, a high school student with Sunrise Movement PDX, said.

"Studies have found that if just 10% of the forests of the Pacific northwest were left unlogged, it would be the same as having no emissions from the entire region across eight years," Stevenson said. "So these forests have an amazing ability to sequester and store carbon."

"I've not seen sort of this level of interest and activism around forests in a long time, like since the old growth wars of the 90s," Swedeen said. "So that's really inspiring, but it is being driven by people's panic and people's fear about their future, especially young people, and I think it behooves all of us to try to act with due haste."

But she says ending logging altogether isn't the answer, especially when it can be done more sustainably. She hopes Washington’s Department of Natural Resources, or DNR, will go beyond the 10,000-acre carbon preserve, but the key, she says, is finding the right balance — not just for the communities who depend on logging but also for the planet.

"If there's a message out there to the public and to DNR, it really is, I mean, thank you for taking this step, and please do more as soon as you can and there are a lot of people out here to help you," Swedeen said. "And we don't want to drive the timber industry out of business or, you know, leave the beneficiaries bereft, so let's sit down and be creative about coming up with solutions."

And, Swedeen says, lets make sure we do it in time.