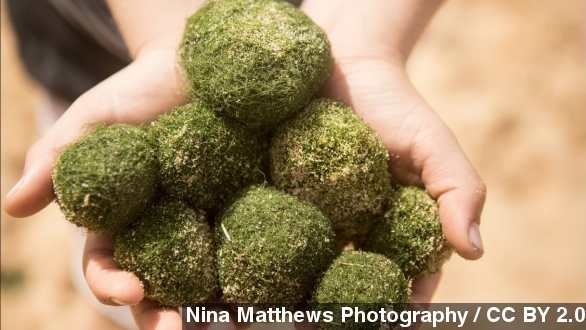 These green balls washed up on the shore of Sydney, Australia's Dee Why Beach last week. And after seeing the photos, many are thinking ... extraterrestrial.

WGN-TV: "Some are calling them 'alien eggs' and 'alien hairballs.'"

But these foreign objects aren't exactly from outer space.

A beachgoer told the Daily Mail Australia, "I picked one up and squeezed it and it was so squishy — but I wasn't sure if it was alive and was worried I might hurt anything inside!"

Turns out the balls, which are almost perfectly circular in shape, are a pretty rare type of living algae.

But, unlike the gross green goop that clings to rocks and forms on the top of water, this type of algae is "free living," meaning it forms into a ball shape.

According to the French Tribune, scientists believe seaweed comes together to form these circular shapes "to guard themselves from predators."

The Sydney Daily Telegraph reports Alan Millar from The Royal Botanic Gardens and Domain Trust says there's a very specific reason these balls came to land: "(It's) clearly another response to spring sunshine, and just the right wave conditions to tumble them. Obviously these biophysical conditions do not align every spring to produce these balls."

So, looks like they're native to Earth, not Mars. Maybe next time.