Was The DNC's Vice Chair Disinvited From Upcoming Debate? 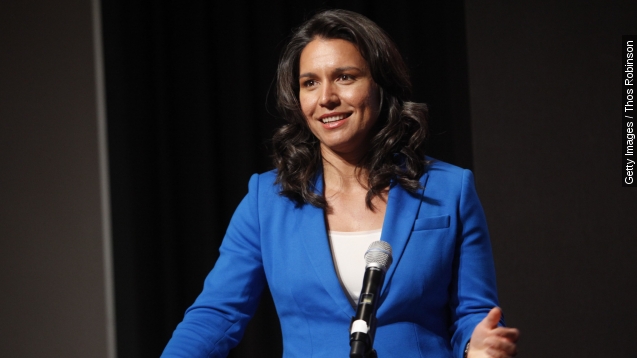 SMS
Was The DNC's Vice Chair Disinvited From Upcoming Debate?
By Matt Moreno
By Matt Moreno
October 12, 2015
The Democratic National Committee's vice chair, Rep. Tulsi Gabbard of Hawaii, has been asking the party to add more debates to the schedule.
SHOW TRANSCRIPT

"We've got to have more opportunities for people to present their vision for our country, their plans, and to be held accountable for the positions that they're taking, the path they'd like to take our country on," Tulsi Gabbard said.

Rep. Tulsi Gabbard of Hawaii says those comments on MSNBC got her disinvited from the Democratic National Committee's upcoming debate.

The New York Times reports Gabbard, the DNC's vice-chair, received a phone call on Sunday from the office of Rep. Debbie Wasserman Schultz, the chair of the DNC.

The call, Gabbard says, was about revoking her invitation to the upcoming debate in Nevada.

Gabbard is a part of a small but growing group in the Democratic party who want the DNC to have more than just six debates, four of which occur after crucial voting takes place in Iowa. (Video via Tulsi Gabbard)

Also at the center of this is the "exclusivity clause" the DNC added in May, saying candidates must not participate in any other debates aside from the DNC-sanctioned ones.

But Schultz has defended the party's current debate structure.

"We're glad the candidates are enthusiastic about our debates. ... And the six debates we will have will be effective in helping them reach voters in that way, and they'll have lots of ways to reach voters other ways," Schultz said on CNN.

But her firm stance hasn't quieted the opposition within the party. She was heckled by Bernie Sanders supporters at the New Hampshire Democratic Party Convention in September.

"At a campaign event in Rochester, Trump was at it again," Schultz said.

That's why Gabbard's comments were seen as a bit of a dig at the DNC's top person.

Schultz's camp confirmed the phone call, but told The New York Times it was about keeping the focus on the candidates and Gabbard was never disinvited. Gabbard hasn't said if she'll attend the CNN-hosted debate taking place Oct. 13.

This video includes images from Getty Images and AFGE / CC BY 2.0.