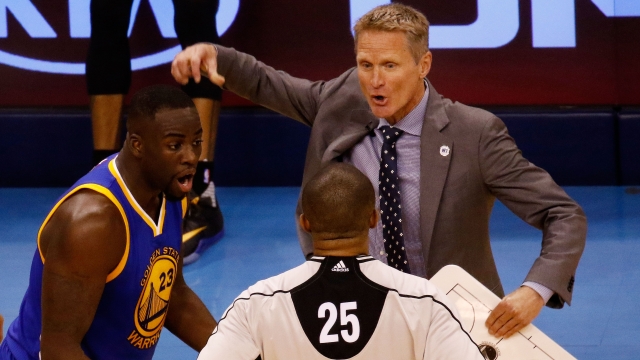 The Golden State Warriors could be without one of their best defensive players for game four of the Western Conference Finals after Draymond Green delivered a swift kick to Oklahoma City Thunder center Steven Adams' groin.

It happened in the second quarter of Golden State's loss to OKC. Green was driving to the net when Adams appeared to foul him. Green, in the same motion, either intentionally or unintentionally raised his leg up and hit Adams in a not-so-great area.

"I followed through on the shot. I'm not trying to kick someone in the midsection. I'm sure he wants to have kids someday. I'm not trying to end that on the basketball court. That doesn't make sense," Green told reporters after the game.

Green has maintained his innocence since the ill-fated kick, but that might not matter to the league office. Green could still be suspended for game four regardless of whether he meant to do it or not.

The NBA recently suspended Cleveland Cavaliers guard Dahntay Jones for game three after he delivered a punch to Raptors center Bismack Biyombo's nether regions. Jones never said he did it on purpose but got suspended anyway.

Still, the stakes are a little higher in Green's case. Jones has averaged just under three minutes a game this postseason. Green? About 37 minutes on average.

Plus, the Warriors are down 2-1 in the series against OKC — the first real speed bump of the season for the defending NBA champs. Losing Green would make game four in Oklahoma City all that more difficult.

If Green gets suspended, he'll likely hear from the league office by the end of the day Monday. The Warriors and Thunder tip off for game four on Tuesday.

This video includes clips from Beats by Dre, The Oregonian and KQED and images from Getty Images.