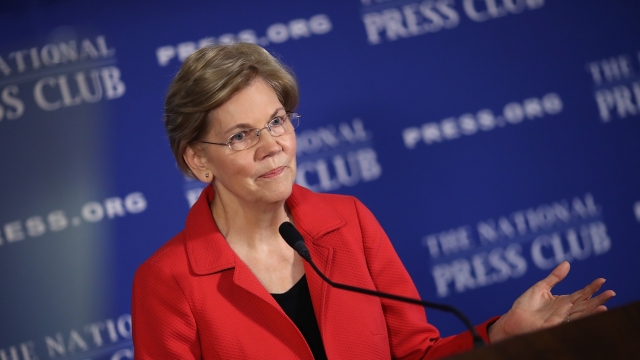 SMS
Warren Identified As 'American Indian' On 1986 Texas State Bar Card
By Katherine Biek
By Katherine Biek
February 6, 2019
The Washington Post called it "the first document to surface showing Warren making the claim in her own handwriting."
SHOW TRANSCRIPT

Sen. Elizabeth Warren identified her race as "American Indian" on her 1986 registration card for the State Bar of Texas.

That's according to The Washington Post, which obtained a copy of the form through an open records request. The outlet noted that it's "the first document to surface showing Warren making the claim in her own handwriting."

The Democratic lawmaker from Massachusetts has long claimed she's part Native American, and even took a DNA test to prove it. The results suggested Warren has a Native American ancestor about six to 10 generations back.

But the test just incited further criticism. President Donald Trump called the results "bogus," and a representative for the Cherokee Nation said in a statement, "Using a DNA test to lay claim to any connection to the Cherokee Nation or any tribal nation, even vaguely, is inappropriate and wrong."

Last week, Warren apologized to the tribe for taking the DNA test in an effort to prove her heritage. She issued a more broad apology Tuesday to the Post, saying she was sorry for identifying as Native American "for almost two decades."

But a spokesman for the Republican National Committee noted the timing of her apology and called it "politically opportunistic." Warren's expected to soon formally launch her 2020 presidential campaign.

Warren's office didn't dispute the legitimacy of the registration card. The Post said Warren filled it out after she'd already been admitted to the Texas Bar and that all information included on the card was to be mainly used for "statistical purposes."