Democrats Disagree On What Bank Deregulation Bill Actually Does 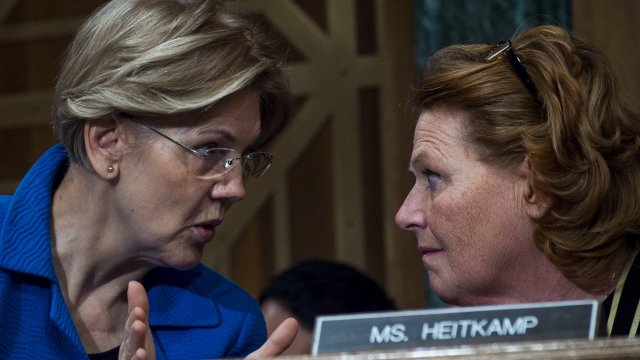 SMS
Democrats Disagree On What Bank Deregulation Bill Actually Does
By James Packard
By James Packard
March 20, 2018
The bill that would adjust some of the provisions in the 2010 banking law doesn't seem to mean the same thing to these two Democrats.
SHOW TRANSCRIPT

The Senate just passed a rewrite of the 2010 Dodd-Frank Act that imposed regulations on the country's biggest banks. It's aimed at loosening some of the restrictions that bill put in place. But there's some disagreement, even within the Democratic Party, about what the bill means.

"Give me a break," Sen. Elizabeth Warren said. "This bill is about goosing the bottom line and executive bonuses at the banks that make up the top one half of one percent of banks in this country by size. The very tippy, tippy top."

"This is not a giveaway to Wall Street," retorted Sen. Heidi Heitkamp. "It is not a giveaway to the largest institutions. Our bipartisan bill makes targeted, common-sense fixes so it will provide tangible relief to community banks and credit unions so that they can lend to borrowers in rural America and support rural communities."

Both of those people are Democrats. So who's right?

Well, on the one hand, Sen. Elizabeth Warren raises the point that regulations on big banks could be relaxed. They could. But even if they were, the feds would still have huge regulatory power over them.

On the other hand, Sen. Heidi Heitkamp has a point that the regulations being loosened might be getting mischaracterized. The new bill leaves a lot up to the Federal Reserve as far as how it regulates the big banks.

That said, under the new legislation, big banks would be able to count some municipal bonds as part of the reserves they could sell if they needed to avoid another bailout. Some experts say that could make it easier for mega-banks to take on greater risk even if they keep following the rules.

So there are arguments to be made on both sides. Keep in mind that this bill isn't a pass for Wall Street to do what it wants, but it also isn't free and clear of changing regulations for the big banks. Both arguments leave out important details.