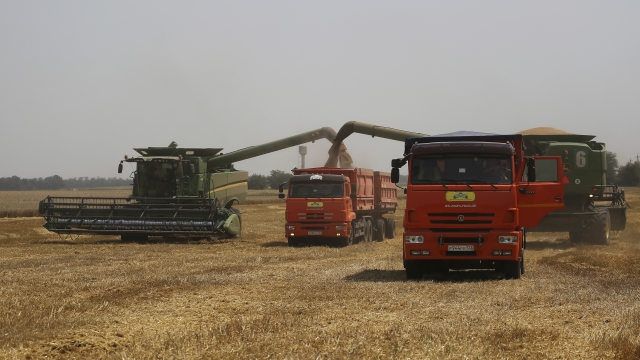 The Russian assault on Ukraine has created an immeasurable humanitarian crisis.

But the war is also sending shock waves through the global food supply chain, especially for wheat, which is the key ingredient in one of the most basic and universal foods: Bread.

"You can literally live on bread. And it's just got all of the essential ingredients, minerals and stuff to sustain life," American Bakers Association CEO Robb Mackie said.

Russia and Ukraine supply nearly a third of the world's wheat exports, which have ground to a halt as wheat prices skyrocket. They are up 67% over last year.

"That's really caused a lot of uncertainty and instability not only in the region there, but also here in our domestic markets," National Association of Wheat Growers CEO Chandler Goule said.

That uncertainty comes at a time U.S. wheat farmers were already dealing with climate change, supply chain issues and inflation.

"You would think that having these high prices would be good for farmers but really what that is, is uncertainty," Goule continued. "And so what that is doing is making things very difficult for farmers to put together their budget."

Food prices overall are already the highest they've been in seven years — up 7.8% in a year. Disruptions to the global wheat supply are creating ripple effects in places like the baking industry.

"We are already starting to see an immediate impact. Many of our bakers have risk management strategies where they buy ahead for later delivery," Mackie said. "And they've already seen a 10 or 15% increase in the price of flour."

Those increases will be passed on to supermarket shoppers, but it's not clear how much prices will go up.

This is about the time farmers in Ukraine should be planting new crops of spring wheat.  But with the invasion and many farm workers off fighting, that spring planting is in jeopardy. And if ports in the Black Sea don't reopen, experts say it could make the wheat and food crisis even worse in the months to come and the U.S. will not be immune.