The War In Ukraine Is Triggering PTSD In Veterans 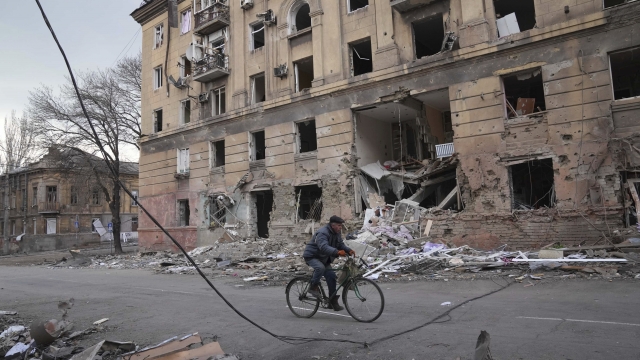 SMS
The War In Ukraine Is Triggering PTSD In Veterans
By Cat Sandoval
By Cat Sandoval
March 9, 2022
The news coverage can be especially hard for U.S. residents who left war torn countries like Syria, central America and Vietnam.

If the war in Ukraine is making you anxious, you're not alone.

Images are having an emotional effect on Americans — even triggering post traumatic stress disorder, especially for veterans or trauma survivors.

"The very first feeling that I felt was anger with what was going on," he said. "And I felt anxious and obviously depressed. Images on television and hearing various things on the radio about what was taking place in Ukraine and that dredged up all sorts of feelings that I have experienced many years ago and had been present ever since."

Shari Botwin has been counseling survivors of trauma and has written about it.

"It's really important to understand that if you're experiencing stress or anxiety or hypervigilance or feeling sad or upset, it's to be expected," she said. "It's normal."

The news coverage can be especially hard for U.S. residents who left war torn countries like Syria, central America and Vietnam. But Botwin says a person doesn't have to have been in a war zone to experience PTSD.

"We have to understand that PTSD is going to be triggered when there's something horrible happening in the world, no matter what kind of trauma it is," she said.

PTSD calls up feelings of being unsafe, unprotected or stranded. A recent IPSOS poll shows 9 in 10 Americans are concerned about global stability since the conflict in Ukraine. And eight in 10 are concerned about the safety and security of the U.S. This combined with 2 years of the pandemic can give a sense of instability.

Dr. Denise Lash is the director of behavioral therapy at Intermountain Healthcare.

"It's really hard to see suffering and be helpless about it," she said.

There are healthy coping mechanisms that vary based on the individual. Experts say: meditating, walking, speaking to friends or a therapist are some ideas. Writing to your senator or donating are other things you can do, but Botwin says whatever feelings you’re experiencing, it’s important to address them — even if you feel powerless that people are dying thousands of miles away.

"It's important that each of us honor our feelings, even if we're not there. It doesn't discount the importance of what we're feeling," Botwin said.

Secretary Denis McDonough acknowledged the stress the war in Ukraine may be having on U.S. Veterans and urged those in need to call 1-800-273-8255 to speak with a therapist or a fellow vet.