Food Prices, Hunger On The Rise Around The World Amid War In Ukraine 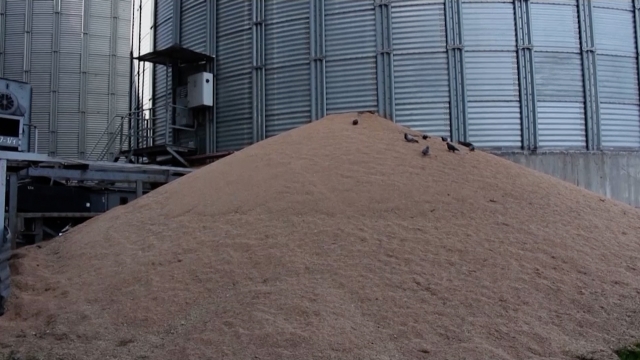 Russian missiles are destroying warehouses and equipment and Russian warships and mines are blocking ports Ukraine needs to export grain.

A Russian bombing destroyed 17,000 tons of wheat in a grain silo in the Luhansk region of Eastern Ukraine.

Unexploded artillery shells make it too dangerous for farming.

Russian missiles are destroying warehouses and equipment and Russian warships and mines are blocking ports needed to export the grain.

"This breadbasket helps us feed the world — Ethiopia, Syria, Yemen, and I could go on and and on," World Food Programme Executive Director David Beasley said. "And now we’re looking at a price hike that will cost us in operational costs per month, anywhere from $60 million and $75 million more per month. And that means less people are going to get food which means more people are going to go to bed hungry."

Ertharin Cousin, a former head of the U.N.'s World Food Programme, says food insecurity, even before the Russian invasion, was becoming dire due to climate change and the skyrocketing cost of fertilizer.

"And then with the Russian invasion into Ukraine limiting the amount of food that the — of wheat in particular available in the global food space that was, as many are calling it, a tipping point into what could potentially become a perfect storm," Cousin said.

NEWSY'S JASON BELLINI: And what would that perfect storm look like?

"The only option to get the grain out of Ukraine is through the Black Sea ports," said Kees Huizinga, a Dutch farmer in Ukraine. "They have to be open. That's the only option."

While the harvest in Ukraine rots, blocked by Putin's navy, President Volodymyr Zelenskyy is asking for western help.

"And Russia is solely responsible for this food crisis. Russia alone — despite the Kremlin's campaign of lies and disinformation," European Council President Charles Michel said. "I've seen it with my own eyes a few weeks ago in Odessa: Millions of tons of grain and wheat stuck in containers and ships because of Russian warships in the Black Sea."

"Russia has played 'hunger games' recently to put the blame on Ukraine," said Yevheniia Filipenko, Ukrainian Permanent Representative to the U.N. in Geneva.

And the U.S. warns those 'hunger games' are going to get worse. As this satellite image shows, Russia is loading its own ships with Ukrainian grain to sell in Africa.