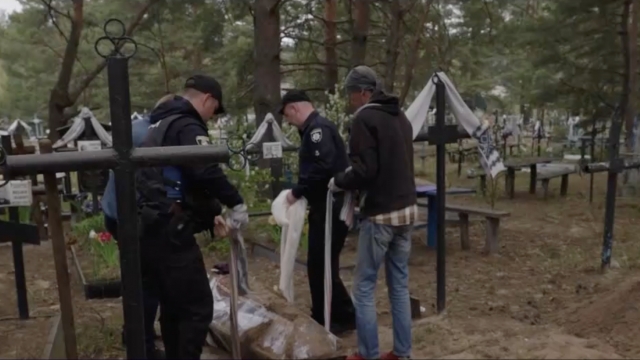 Ivankiv is still recovering after a month of Russian occupation. The mayor says Russians left more mines behind than the number of people in the city.

This is where Natalia buried her husband.

War crimes investigators are taking his body from the soft earth, looking for evidence so his killers can be held to account, so his soul can rest in peace.

Natalia wants us to know he was buried with love and with the kindness of strangers.

"We buried him just by ourselves," she said. "There were some guys — I don't know them — that saw the Russians were no longer on this road and they helped me to take his body and run with it to the cemetery to bury him, because it was still dangerous."

That was on March 20. The town of Ivankiv, one of the first that Russian troops came upon on the highway heading south to Kyiv from Belarus, had, at that point, been under Russian occupation for more than three weeks.

Her story is one of many circulating in Invankiv of compassion shown by strangers, of small acts of heroism, of pluck and resourcefulness while a community under occupation fended for itself.

Tetyana Svrydenko, the mayor of a community that includes 81 surrounding villages, said pharmacies, bakeries and hospitals braved the occupation to continue providing the essentials. And there's also her own story.

NEWSY'S JASON BELLINI: As the local leader, did the Russians come looking for you?

A week into the occupation, the Russians hunted for the mayor but  townspeople helped her hide.

MAYOR TETYANA SVRYDENKO: I got information from one of our civilians to leave the house because the Russians were looking for me. I'm also very grateful to the people who hid us.

BELLINI: Can you tell me about some of the terrible things that happened here?

SVRYDENKO: It was a lot of horrible things. Torture of former soldiers, terror against civilians. Everything. But I don't want to tell you about it. I want as soon as possible to forget that. And I also want people to come back to their normal lives.

Ivankiv is still recovering after a month of Russian occupation. Newsy was told to "Stay on the pavement. Don't walk on the grass or in yards because they haven't de-mined this entire area." In fact, the mayor tells us the Russians left behind more mines than there were people in this entire community. She says that despite all that happened here, people still love Ivankiv.

Before the war, one of the things people here loved most, took the most pride in, was their town being home to some of the most noted works of one of Ukraine's most famous painters — folk artist Maria Primachenko. She died in 1987. She grew up as a peasant in one of this community's villages.

There's video the mayor recorded on February 28, which was the day Russian shelling hit the museum and burned it to the ground.

"Let's remember it for our whole life," Svrydenko said. "We built it, collecting money, and with so much effort, but the Russians destroyed it. Glory to Ukraine. We will win. It's our land. We will restore everything."

And that may just be possible.

At the time, the art world thought all the paintings were destroyed. But the town's cultural director tells Newsy that on that day, just after a Russian shell landed on the museum, the security guard who lived nearby ran over and, entering through a window, rescued the Primachenko paintings one by one.

BELLINI: Where did they take the paintings?

SVRYDENKO: The paintings are in a safe place outside the community.

For their protection, she won't say where.

"We still don't feel that the war is over because we are so close to the Belarusian border," she said.

Belarus, around 35 miles away, is where the Russian tanks came from, on the road from Chernobyl.

Natalya's husband of more than 30 years, who worked at the Chernobyl site, decided to drive from the home where they were sheltering to check on their own home nearby on the day after the Russian invasion.

He became one of so many civilians killed in his car. The charred evidence of such attacks were stacked in piles around the Kyiv area.

Natalia says she went passed a burned out car several times, not realizing it was her husband's. She later found out and took him to be buried.

At the exhumation, she somehow found the courage to look at what remained of his corpse once again.

Ivankiv police say his is one of 34 people killed in the community — two of them were children.

After the war crimes prosecutors document Natalia's husband's death, he will be reburied at a different cemetery. It's a dignity provided first by strangers, then by truth seekers in a town where people and paintings received love in the worst of times.