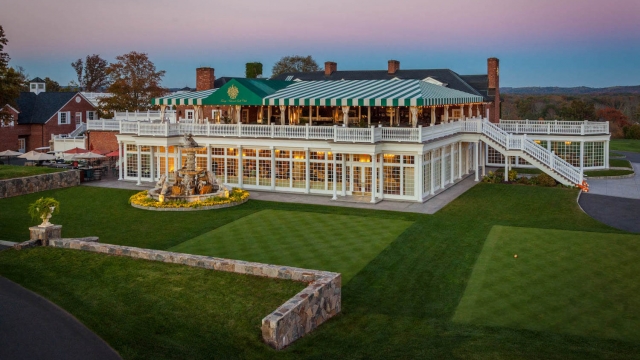 The Latino construction workers who tended to Trump Organization properties, building rock walls and other regal features at resorts such as these, were known as "Los Picapiedras" — Spanish for "the Flintstones."

That's according to a Washington Post report out Friday. Two former employees of a construction company used by the Trump Organization told the Post they were hired to work at President Trump's properties despite having entered the U.S. illegally and lacking proper papers.

One told the newspaper that a supervisor instructed him and other workers to buy fake Social Security numbers and green cards in New York. A current employee of Mobile Payroll Construction said the crews that worked on President Trump's winery and golf resorts also included unauthorized workers.

The Post report comes two days after sweeping raids targeting undocumented workers at agricultural plants in Mississippi. And those raids followed the El Paso mass shooting, which ramped up criticism of the president's immigration rhetoric; among other statements, he has repeatedly said the U.S. is facing a migrant "invasion."

On Friday, a Trump Organization spokeswoman told Newsy in a statement: "Where an employee is found to have provided fake or fraudulent documentation to unlawfully gain employment, that individual will be terminated. Fortunately, among the thousands of individuals employed by our organization, we have encountered very few instances where this has occurred."

The Post interviewed Jorge Castro, a 55-year-old undocumented immigrant from Ecuador who worked for the same construction firm and at seven resort properties over nine years. He told the newspaper President Trump "doesn't want undocumented people in the country," but added, "At his properties, he still has them."

Edmundo Morocho, another unauthorized immigrant who worked for the construction crew, told the Post a supervisor directed him to a New York street corner to buy fake documents.

And last year, Victorina Morales, an undocumented worker from Guatemala, shared her story with The New York Times about working as the president's housekeeper at the Trump National Golf Club in New Jersey. She stopped working at the club after that story was published.

On Friday, the president offered this determined statement on the ICE raids in Mississippi.

"I want people to know that if the come into the United States illegally, they're getting out. They're going to be brought out. And this serves as a very good deterrent."

But Castro told the Post he doesn't believe that applies to Trump Organization properties. "If you're a good worker," he said, "papers don't matter."